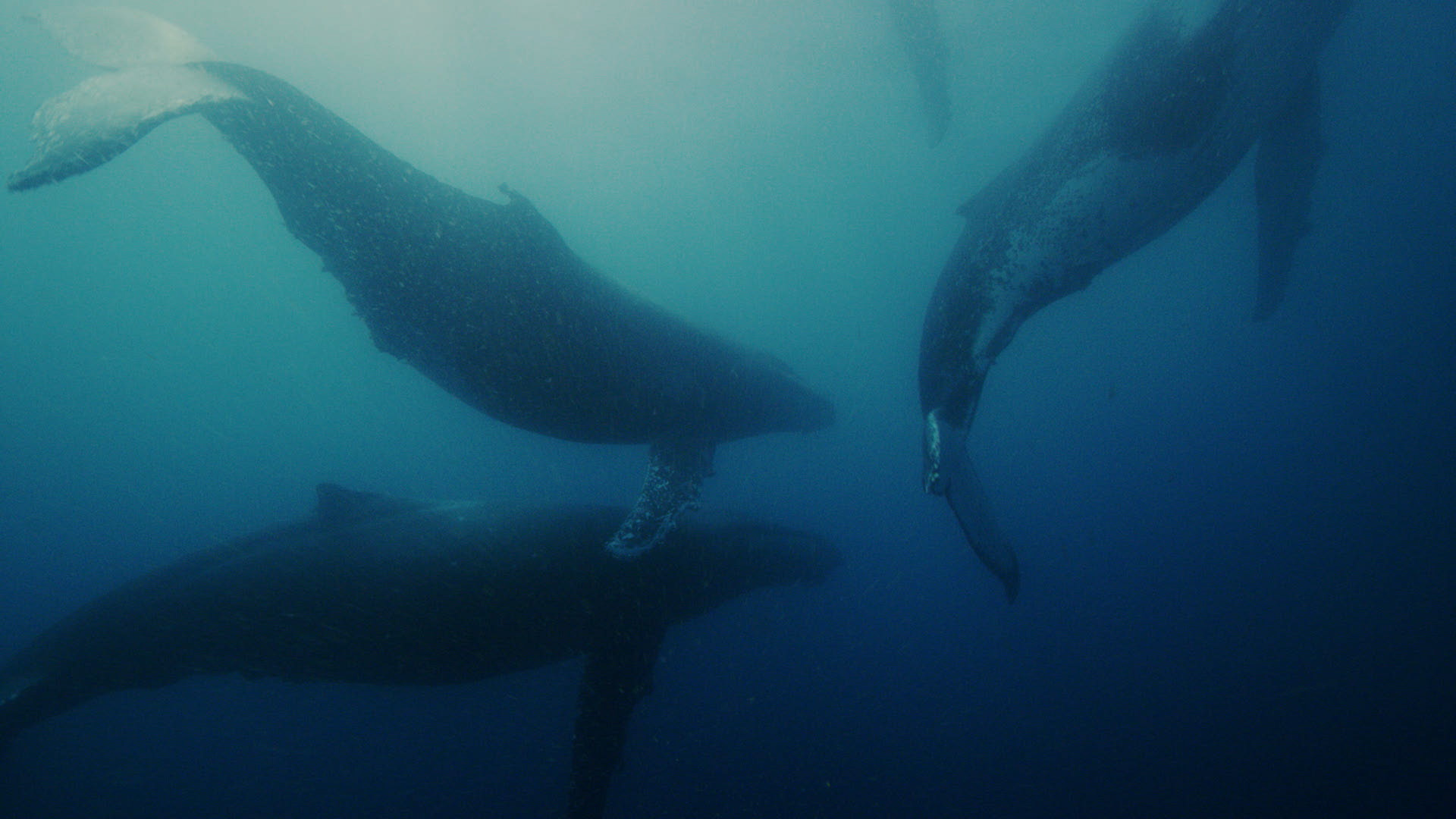 Despite not having vocal cords, humpbacks manipulate air within their nasal cavities to communicate. Cetacean scientists use bioacoustics to understand the physiological and anatomical mechanisms and the purpose behind their vocalisations. 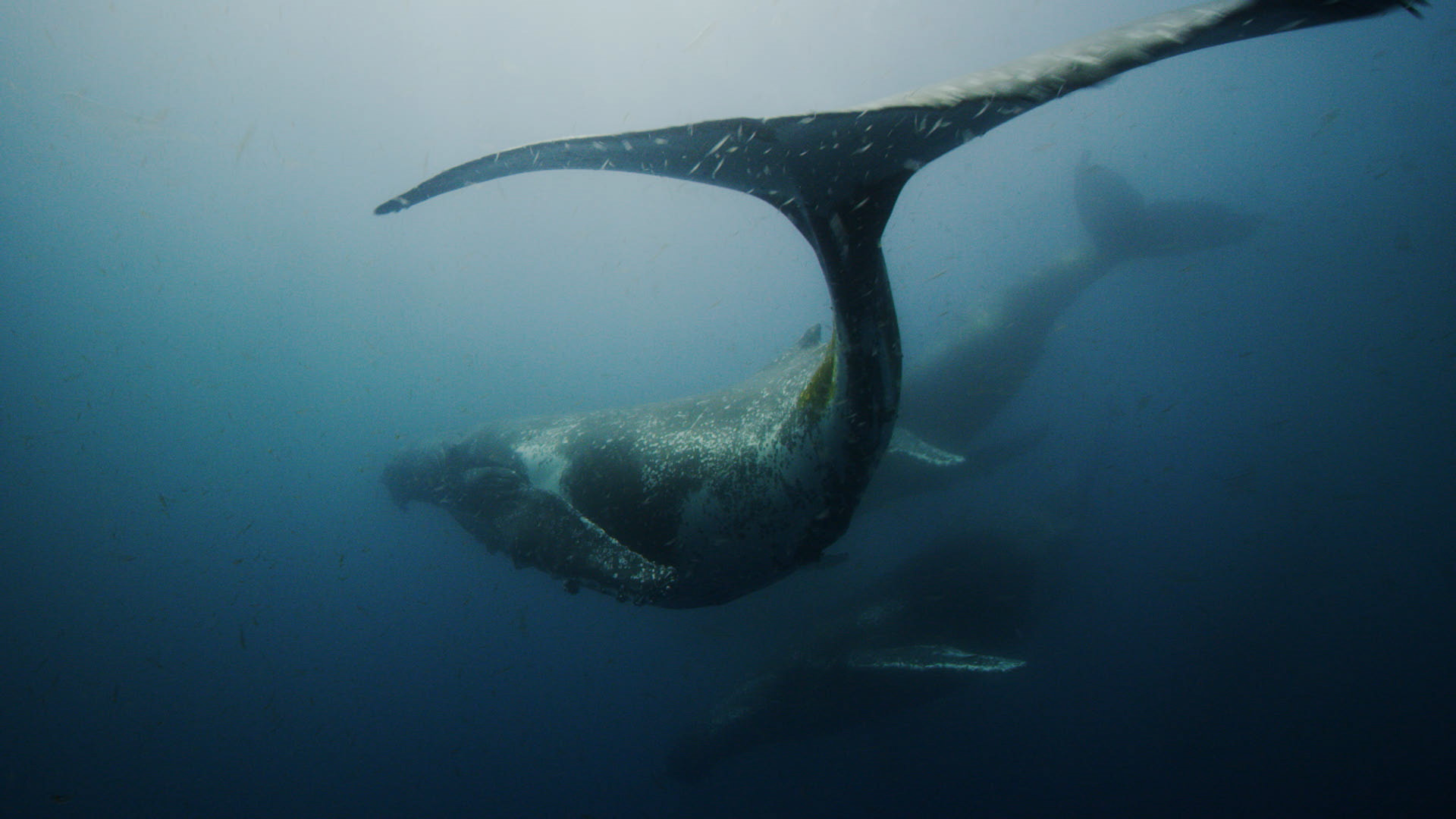 Pod of Humpbacks Retreating through Krill

Researchers have recently been astounded by the discovery that humpback whales are likely consuming two to three times more krill than was previously assumed. 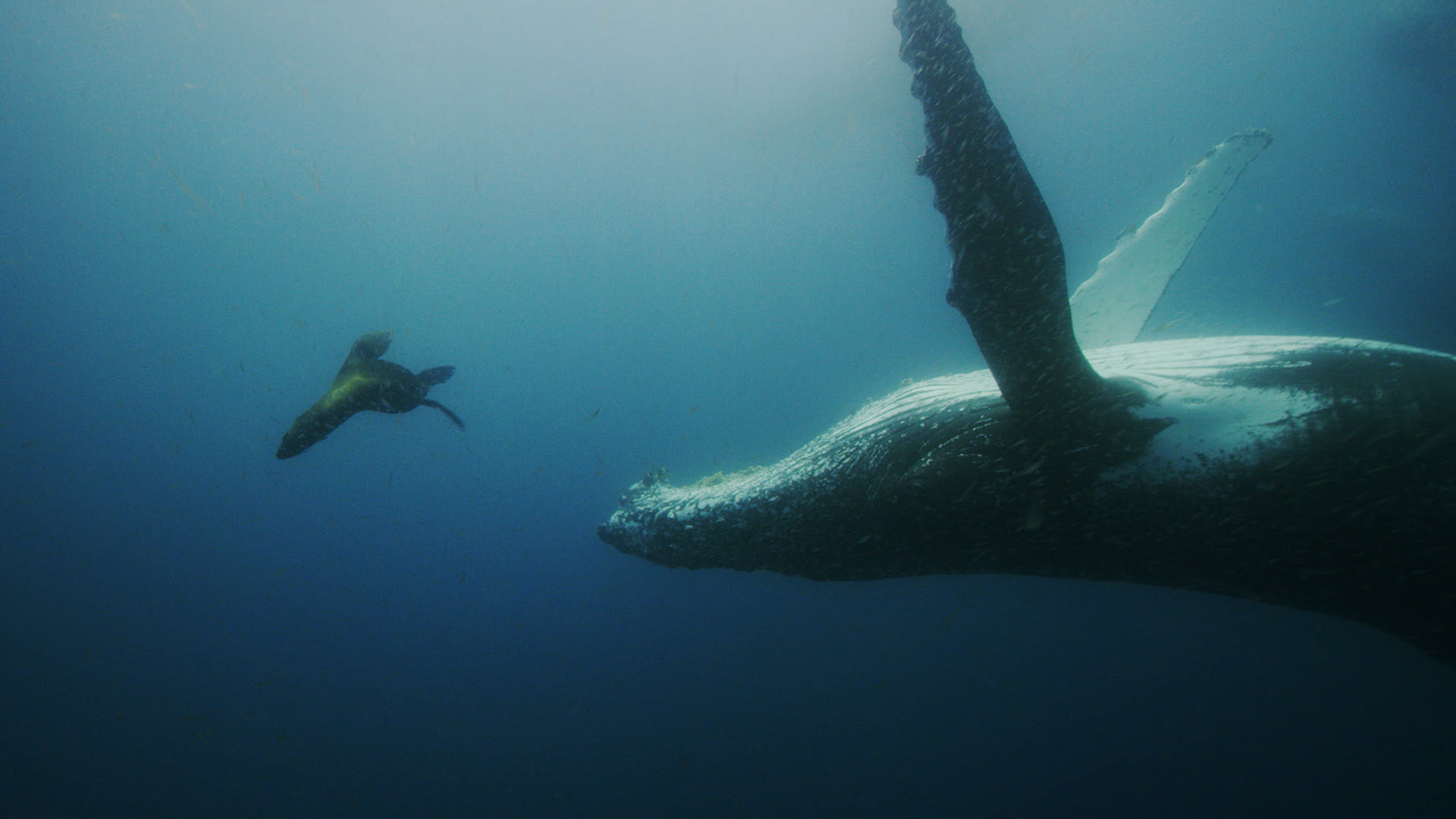 Humpbacks have been characterised as altruistic and kind because they have interfered with killer whale attacks. The humpbacks' care toward other species is a fascinating anomaly that perplexes behavioural scientists. 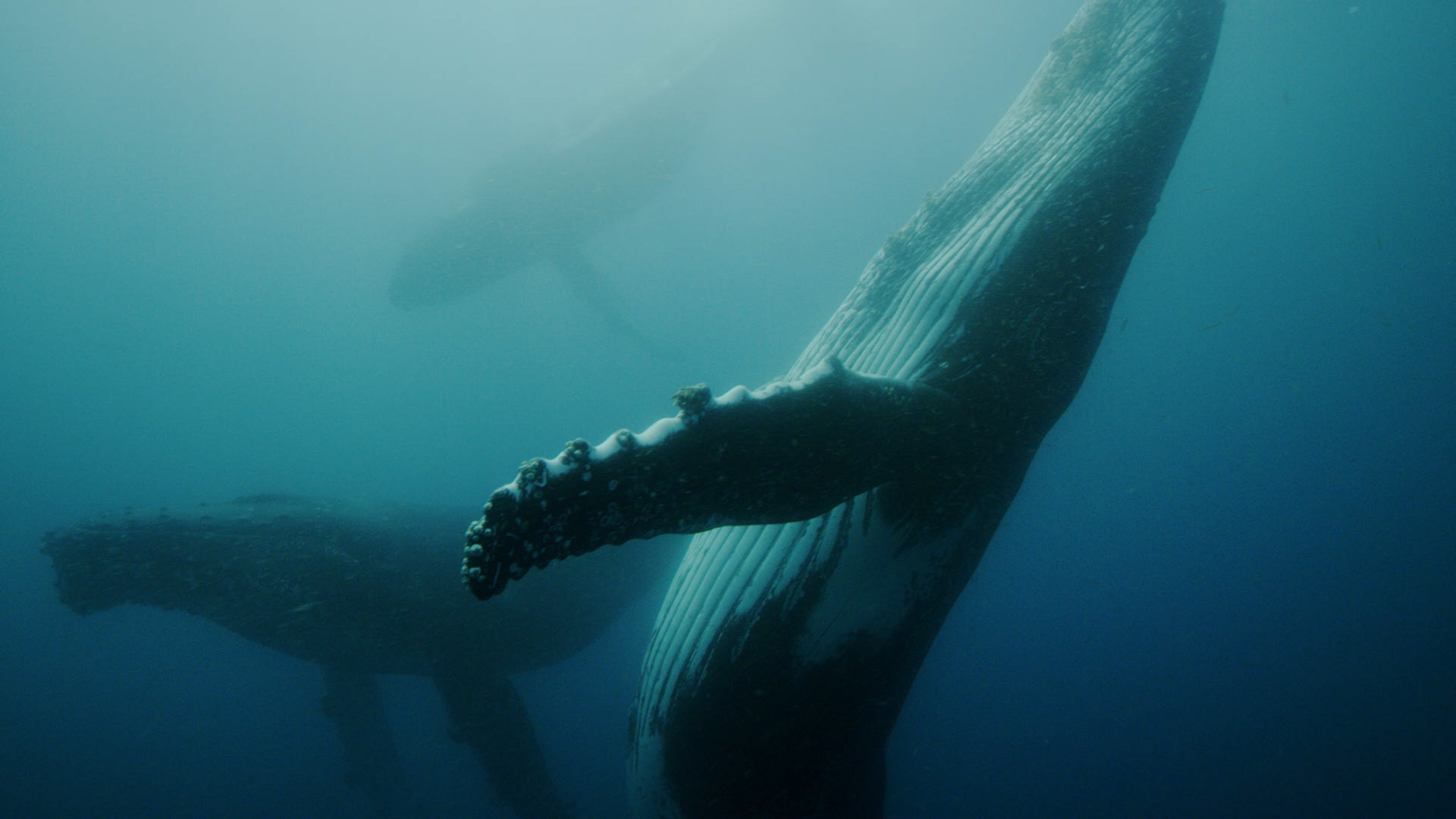 A legend of East Africa remains about King (Sulemani), who asked god to give him the ability to feed the world. This angered god, leading him to dispatch a whale out of the ocean to eat all of Sulemani's crops, teaching him that his desire was impossible. 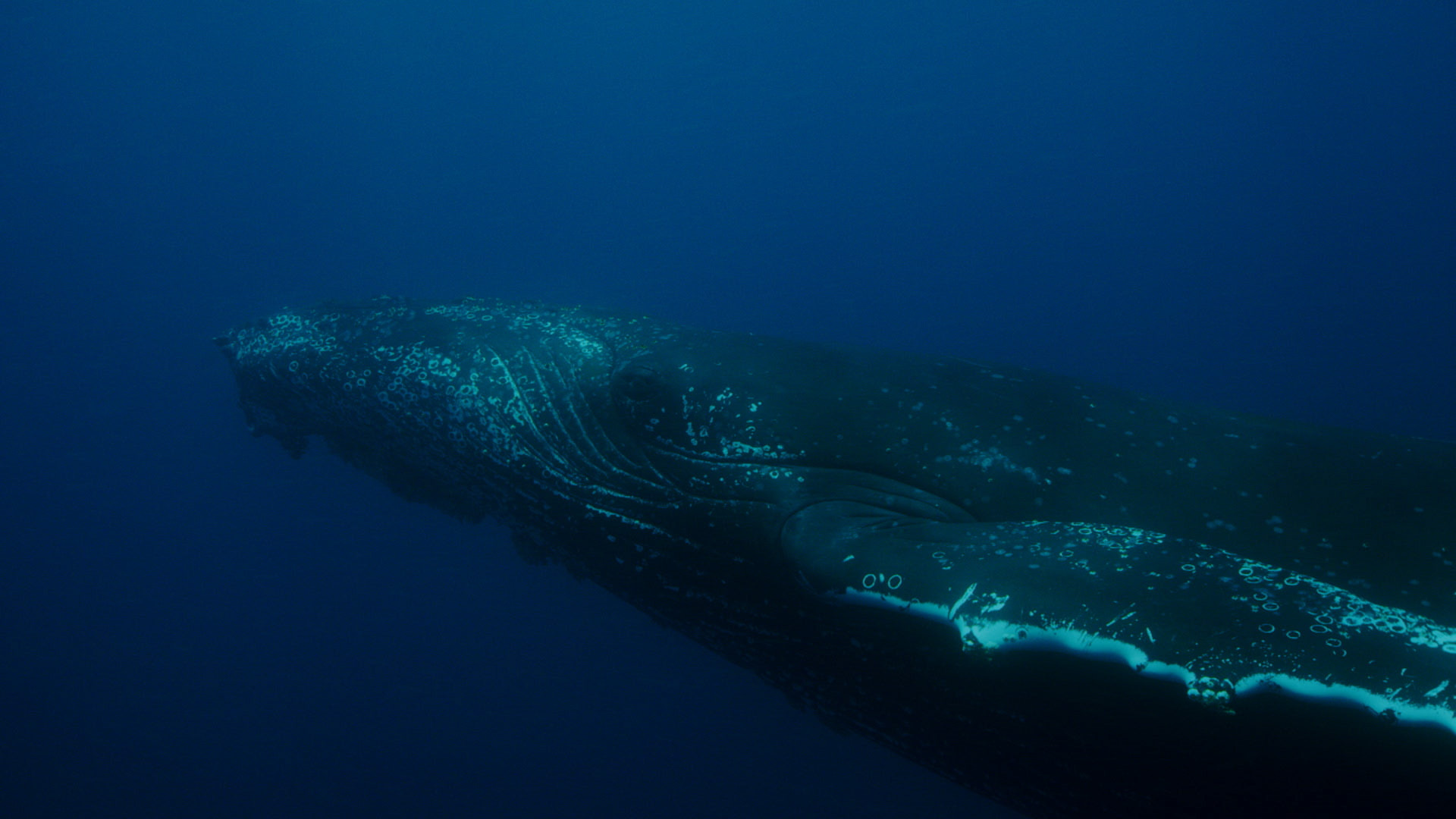 The 'lines' or 'grooves' situated on the underbellies of humpbacks are called Ventral Grooves. The blubber beneath the grooves expands and contracts while the whale feeds, allowing the animal to take in enormous volumes of seawater and krill. 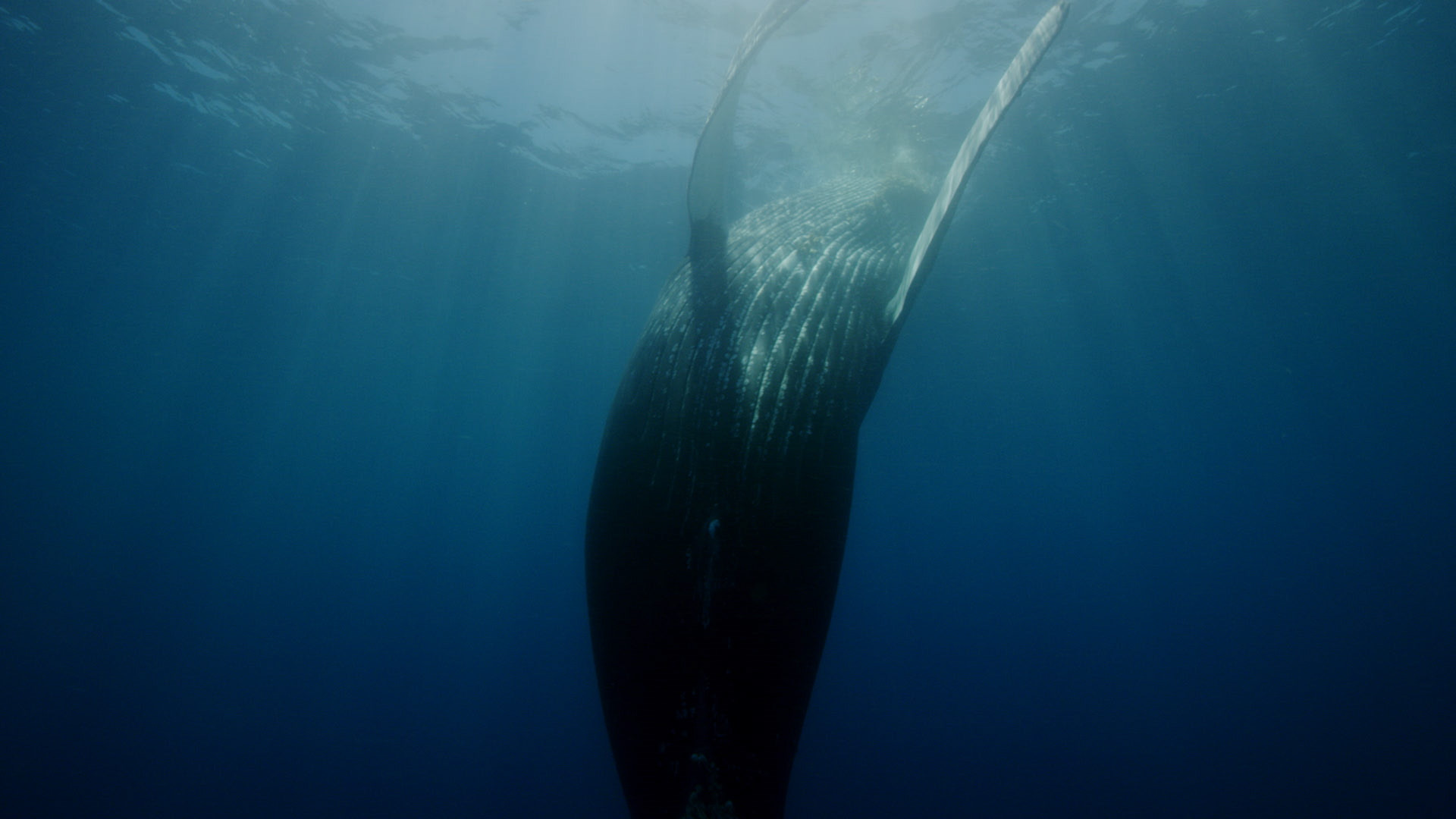 Solitary Humpback Spyhopping from below Surface

When a humpback whale displays spyhopping behaviour (extending its head and rostrum out of the ocean to inspect what's on the sea surface), they do so incredibly gently. Rather than using their fluke to propel them, they rely on their buoyancy, which fosters a tranquil gesture. 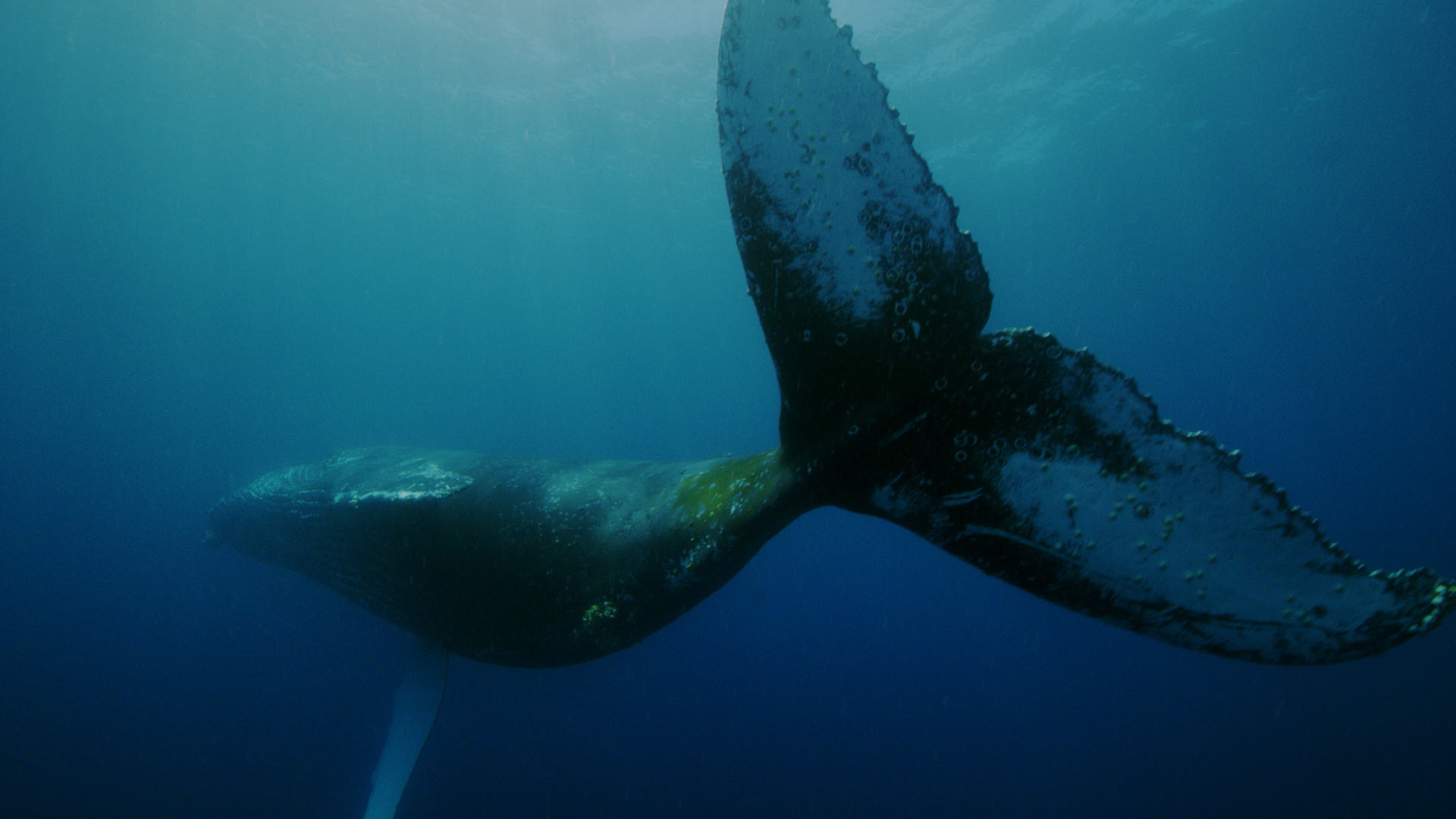 The Tubercles (bumps) on the edge of the flippers are unique to humpback whales and are the reason they can reach such high speeds for their size. Humans have taken advantage of this so-called 'tubercle effect' and have designed wind turbines with similar bumps, increasing efficiency. 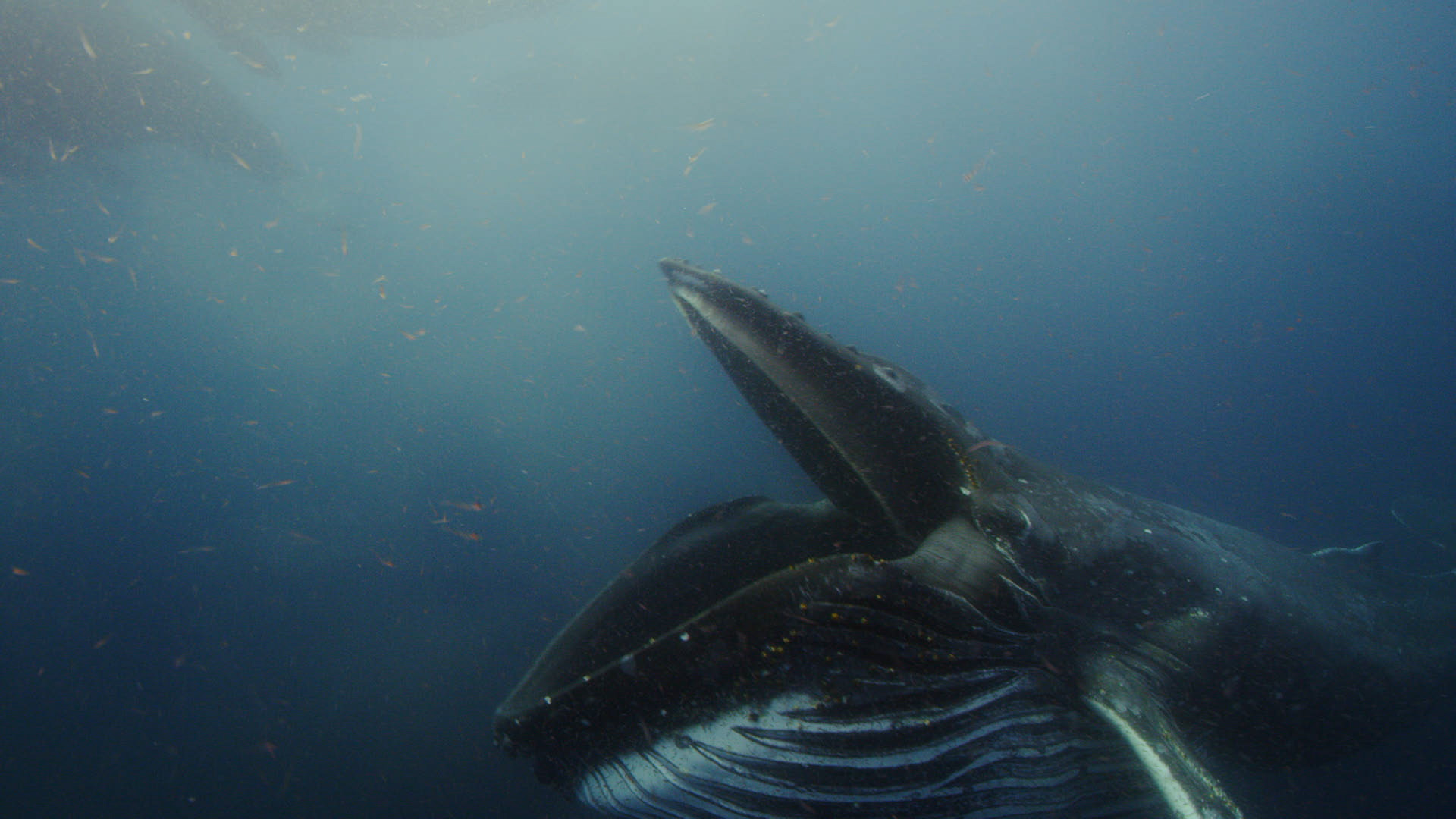 Humpback whales consume a minimum of 4% of their body weight (about 4 tons) of krill daily. While adult humpbacks spend about 90% of their days foraging, they only feed twice daily. 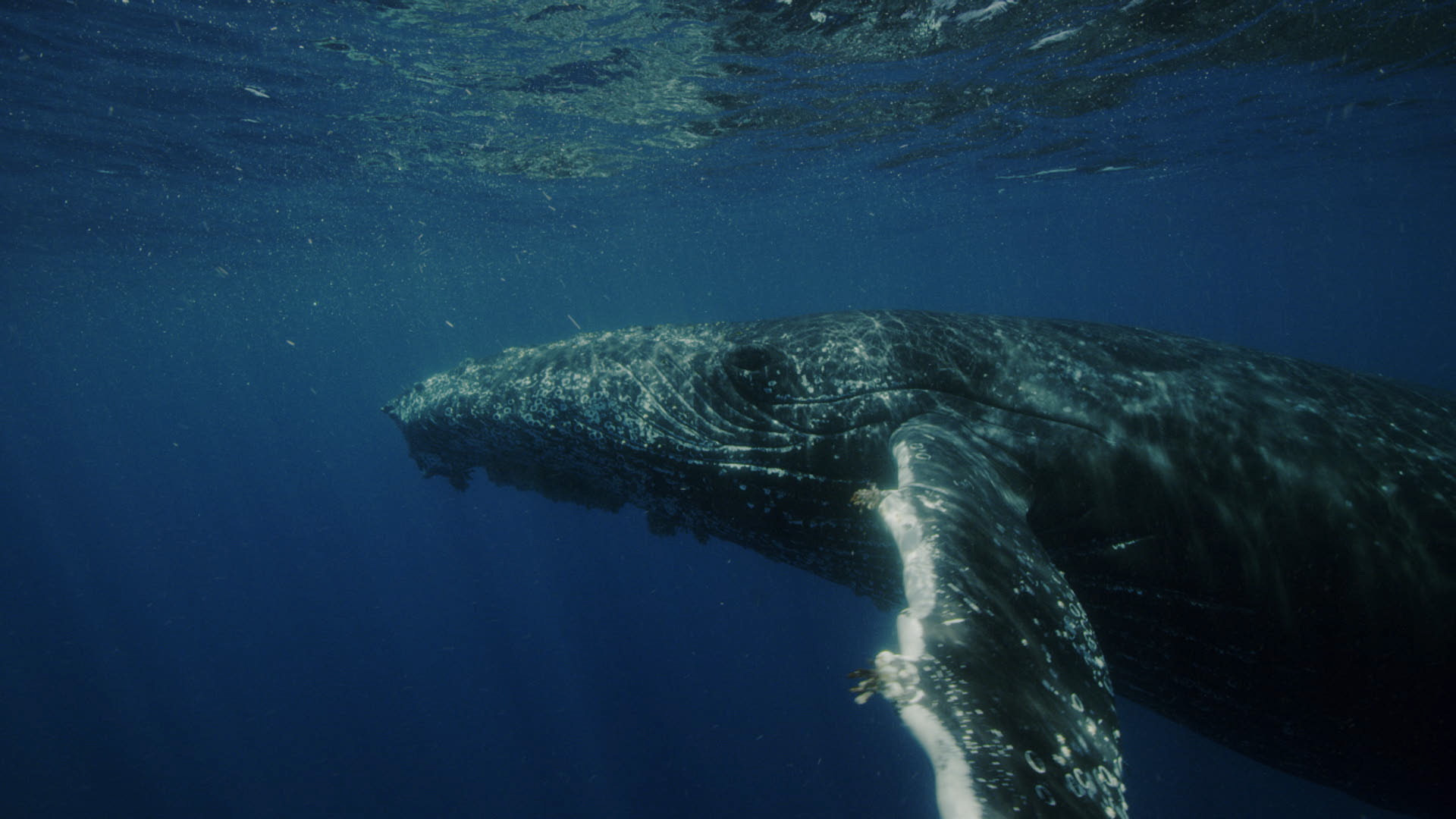 Close-up of Humpback Passing By Camera

The grapefruit-sized 'bumps' on a whale's pectoral fins and head are individual hair follicles called Tubercles. Tubercles aid in drag reduction and support the whales' graceful and acrobatic manoeuvres. 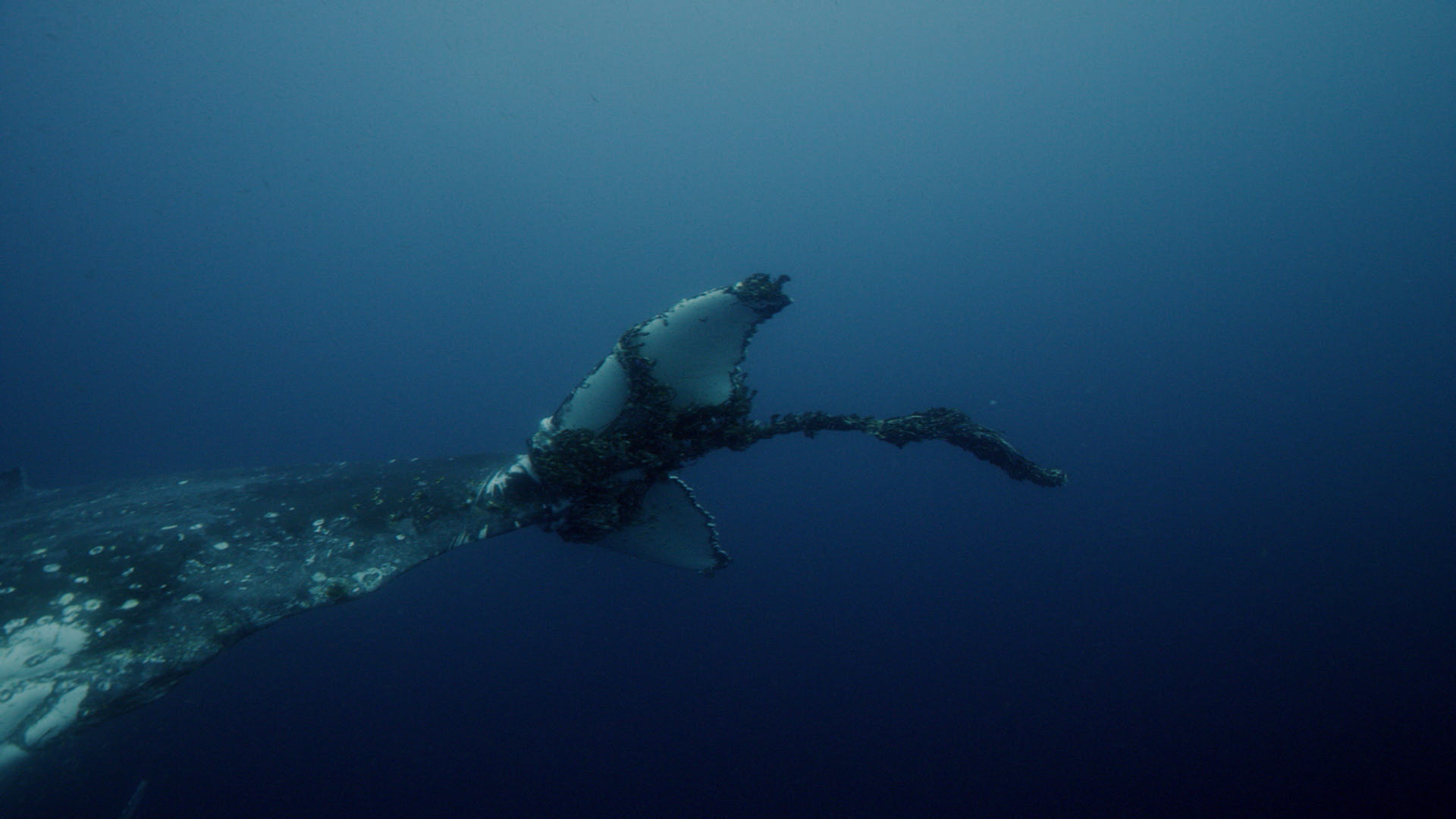 Whales are especially vulnerable to entanglement because of their extensive migrations that expose them to masses of fishing gear, ghost nets, and most frequently, shark nets and drumlines. 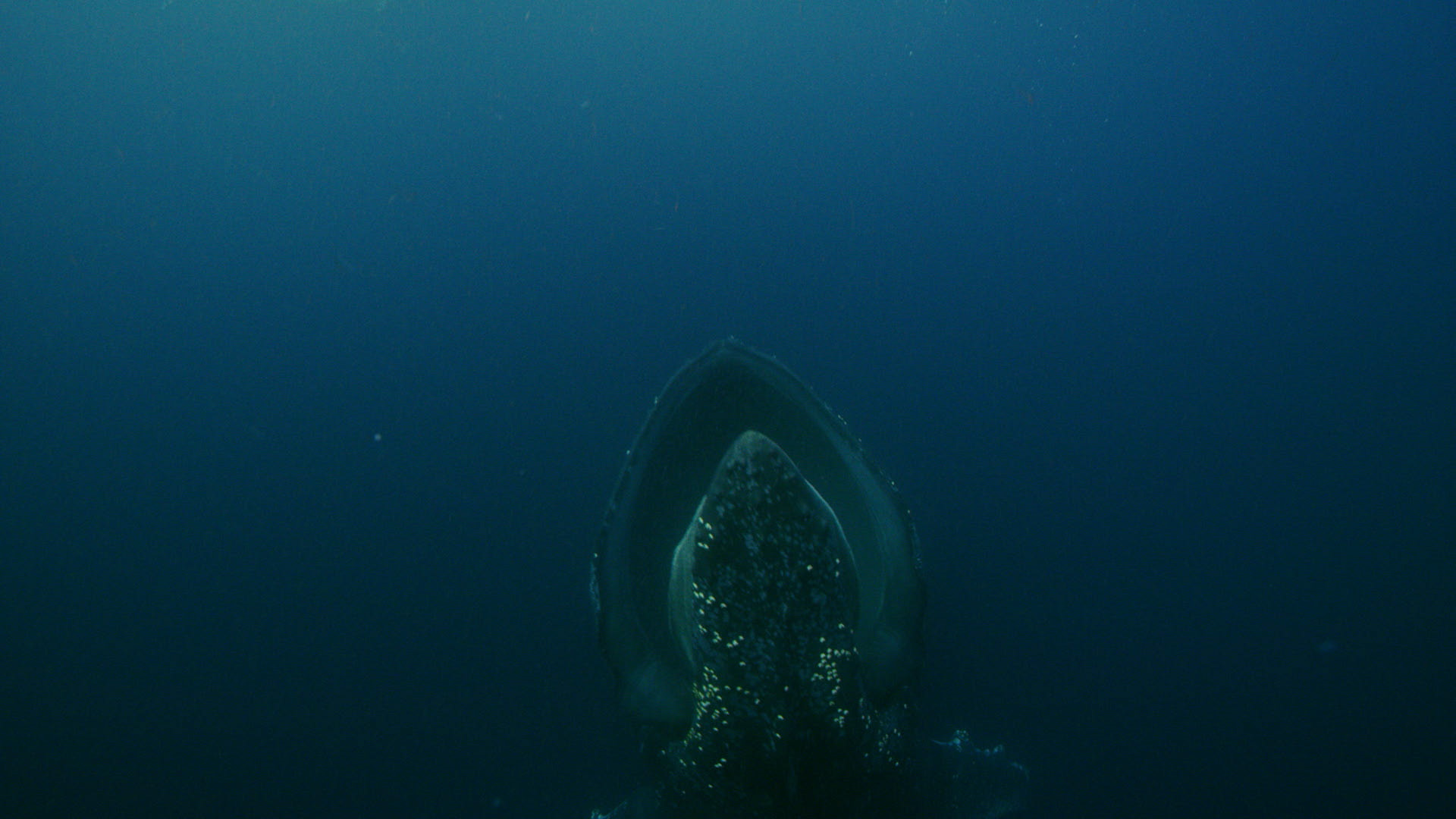 Humpback whales feed predominately during the summer when they stock up to live off their fat reserves during their long winter migrations and mating seasons. 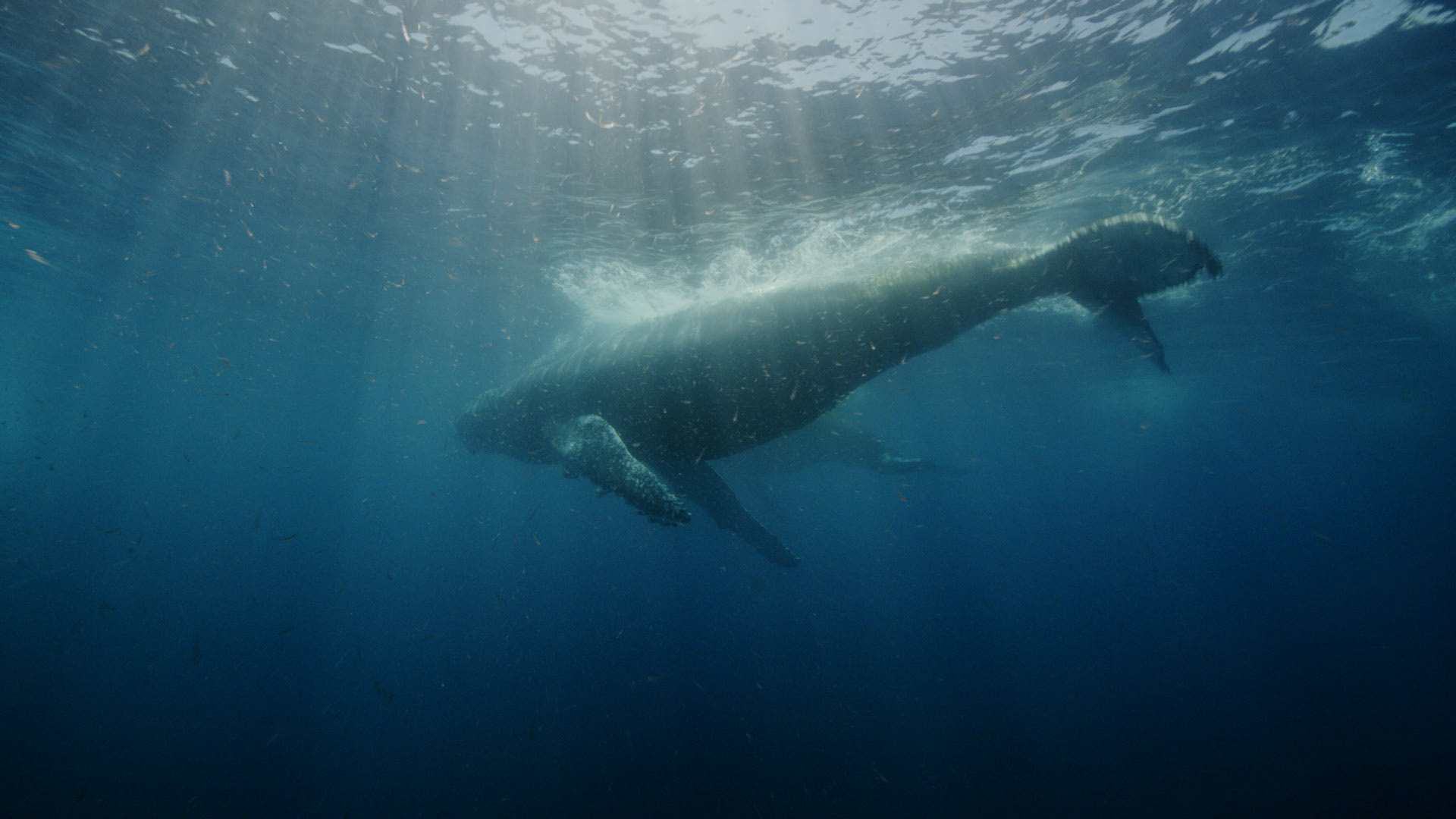 A pod usually comprises two to three and sometimes up to fifteen whales. A pod typically includes a female, her newborn calf, and a male, although males usually do not display much care for the calf. Multiple males in a pod can lead to aggressive interactions and competitive displays. 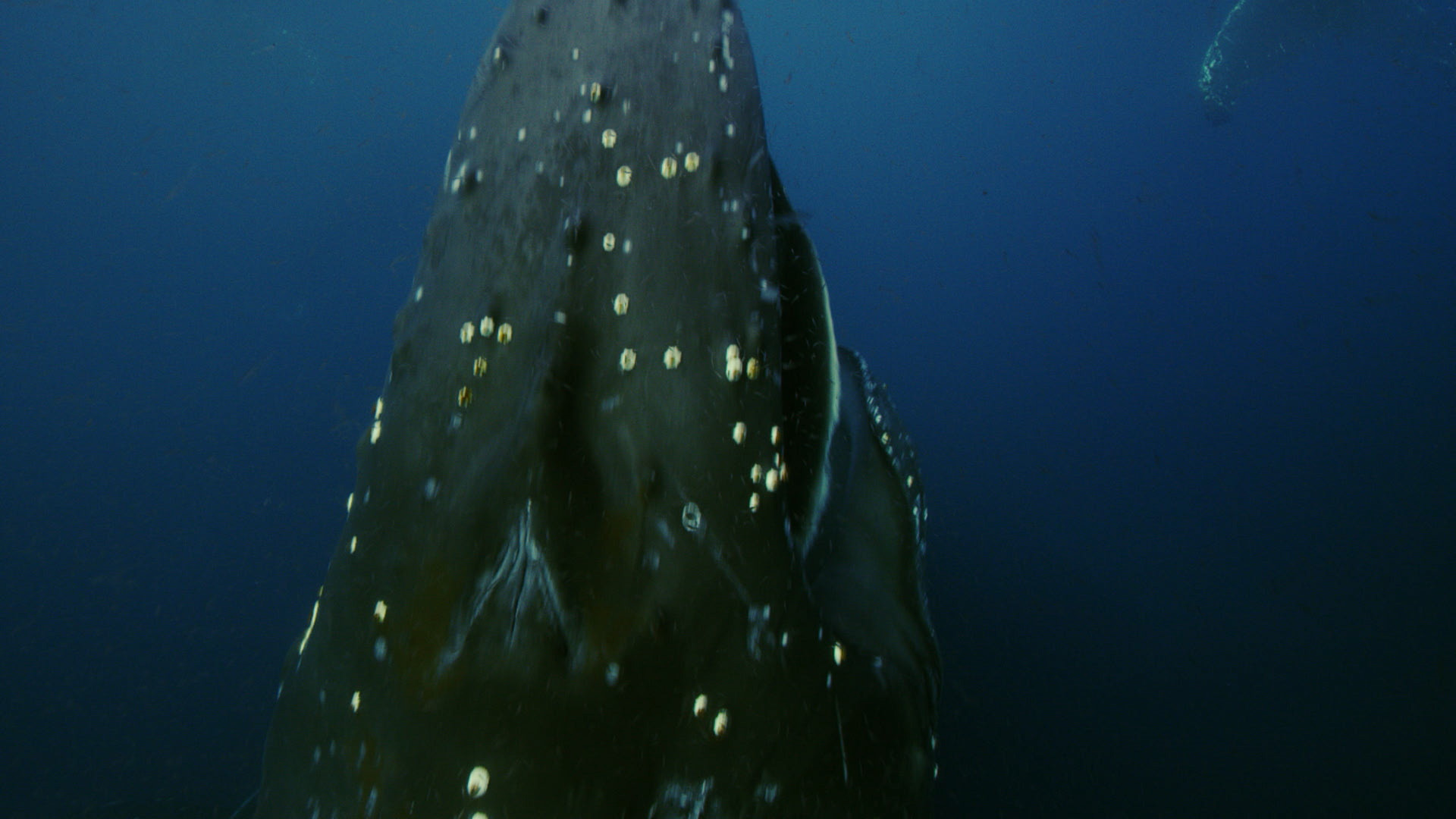 Studies show that Humpbacks create incredibly complex 'Song Cycles". The length and amount of sounds increase and evolve until they are highly complex and eventually abandoned. Then, a new and basic melody is created to pass between individuals and among populations. 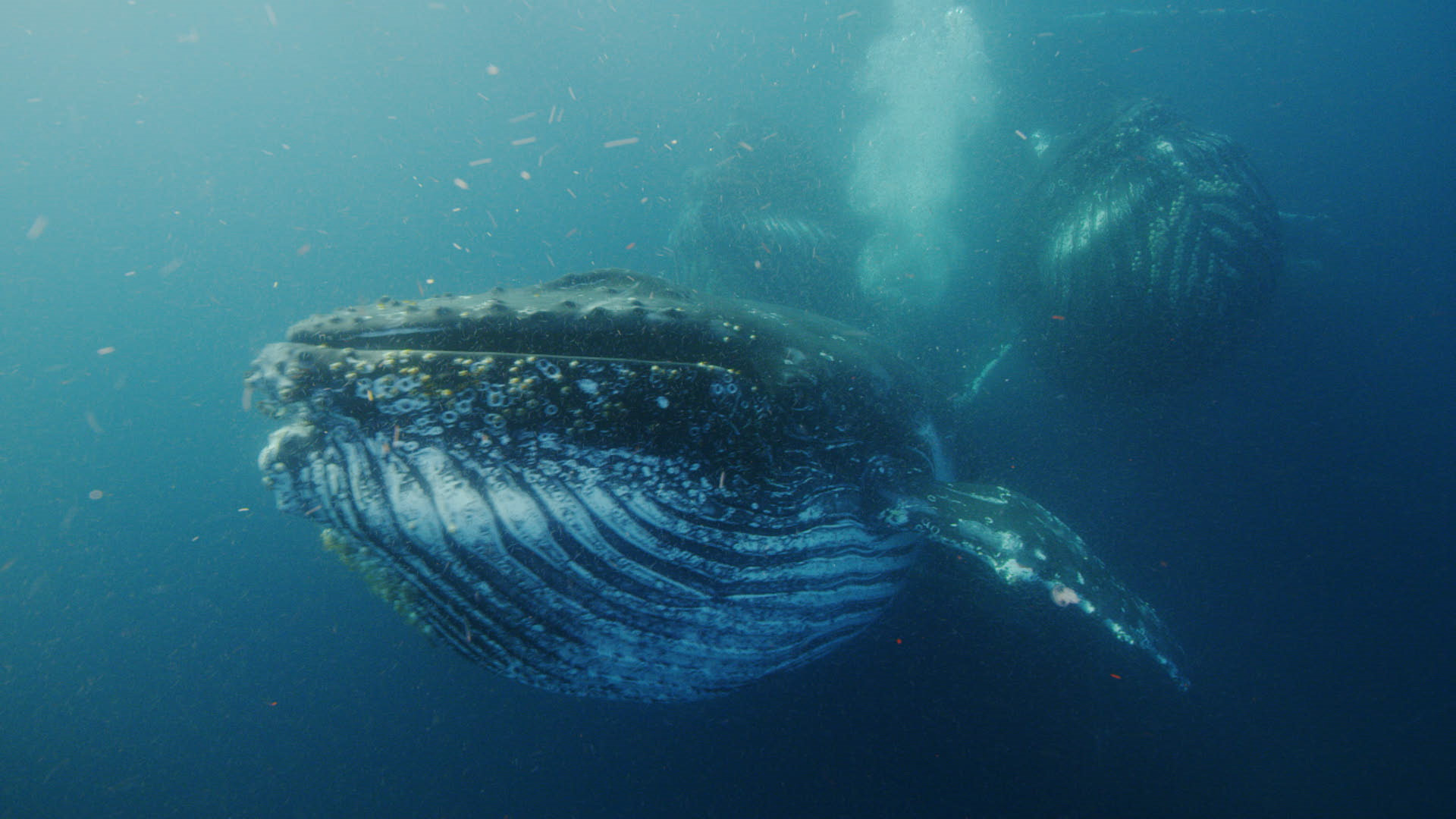 Humpback whales unite and generate "bubble nets" as an intelligent feeding method. With their blow holes, they produce loads of bubbles that surround and trap their target. Scientists suspect that the whales organise such strategic feeds via acoustic communication. 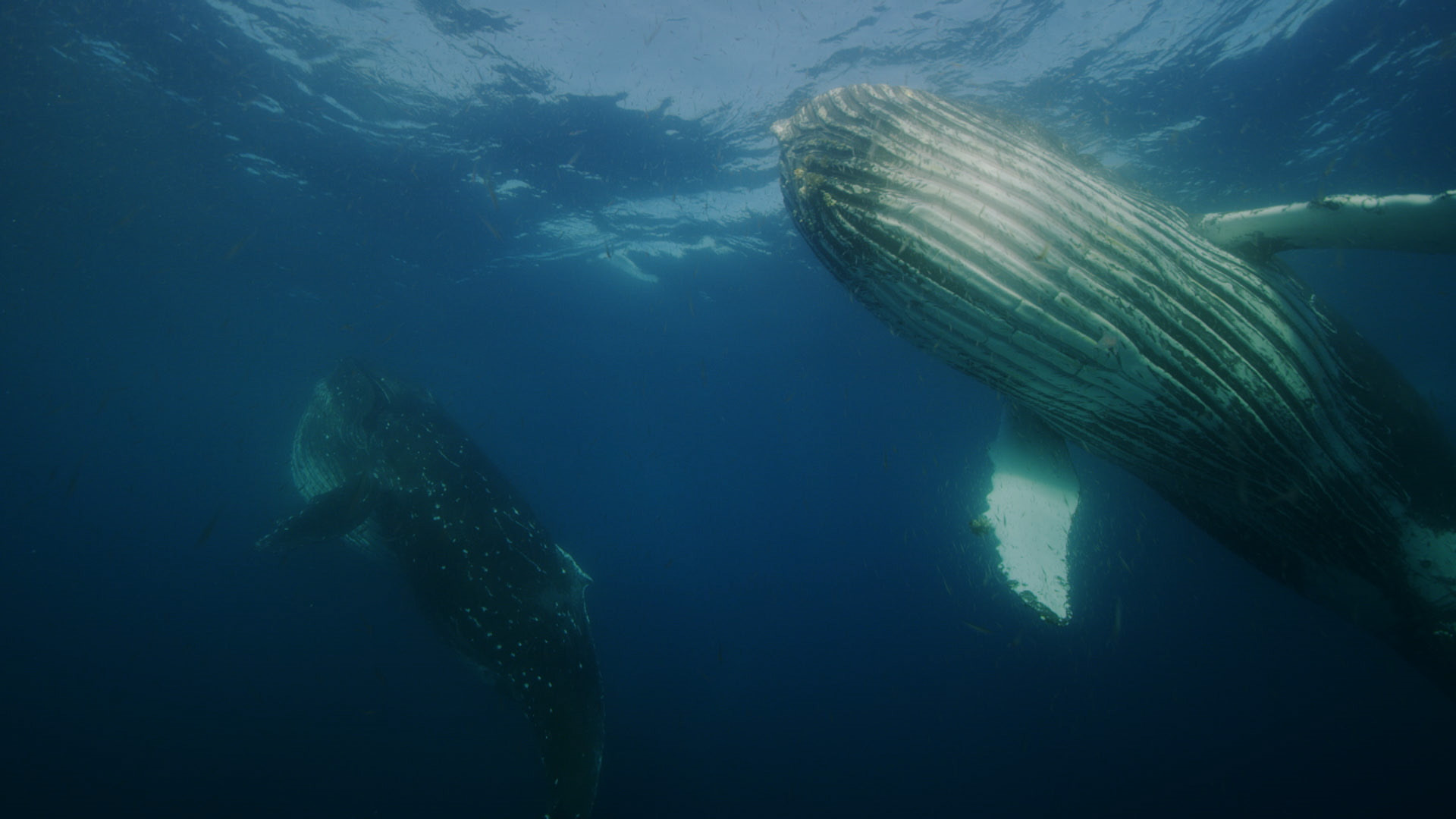 Humpback whales are known for their white bellies and black dorsal side. This specific colouration was thought to be developed for camouflage. From below, the white underbelly blends with the sun-penetrated sea surface. Likewise, from above, the dark colouration visually fuses with the sea's murky depths. 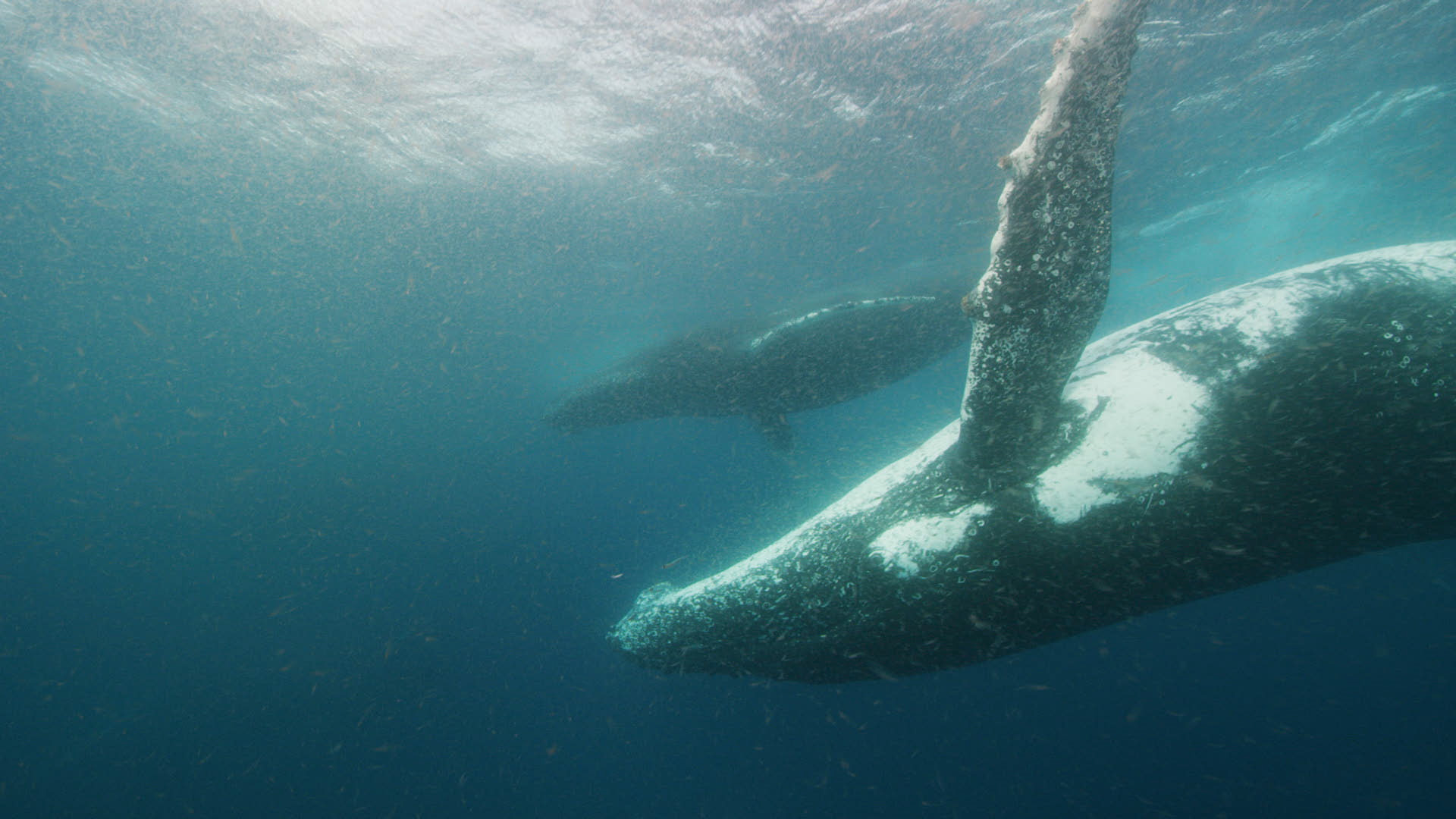 Comprising the most extended appendage in the world, the Humpback whale's pectoral fin can grow up to 5 metres long. Their pectoral flippers are one-third of their body length and are certainly the largest of all cetacean flippers. 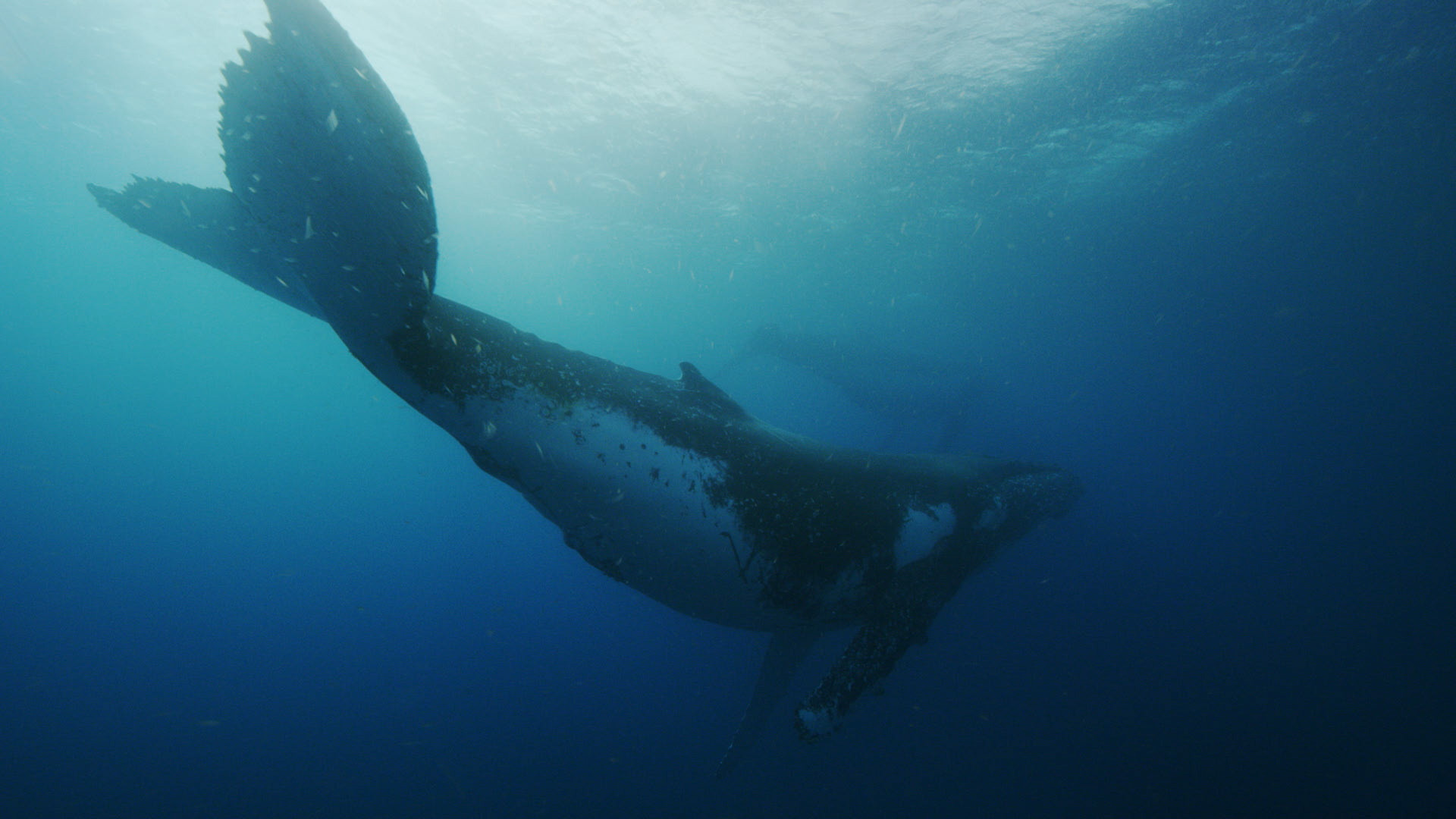 The scars on a humpback are accumulated throughout their lifetime. Most scars are obtained in their vulnerable juvenile years from shark and orca attacks. More scars are collected from aggressive encounters and accidental scratching against the sharp barnacles attached to other humpbacks. 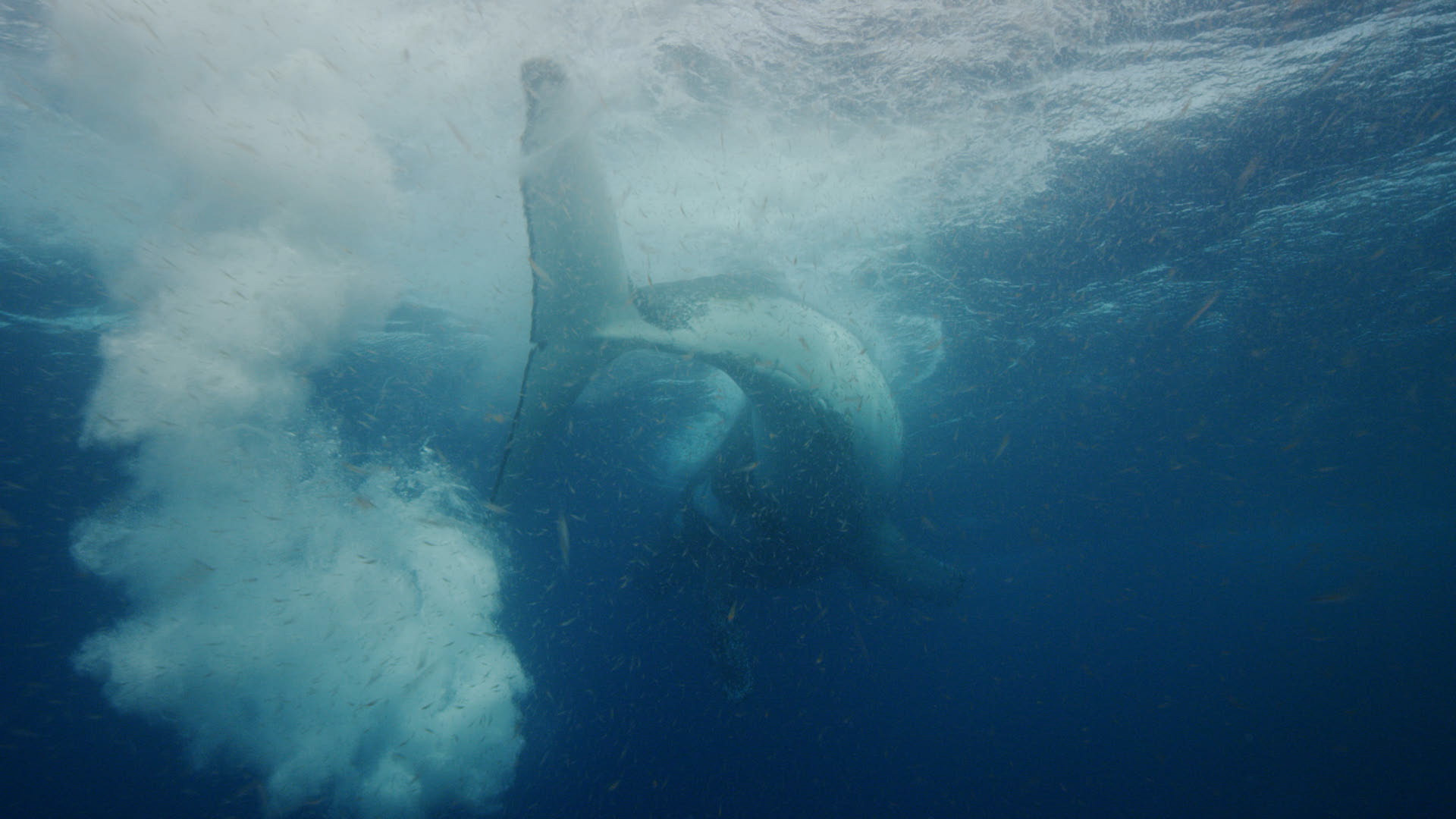 New studies highlight the importance of whale poop and its unexpected role in climate change mitigation. Like cow faeces are essential for healthy soil, whale faeces provides nutrients (such as iron) that sustain phytoplankton (krill) and facilitates the krill's carbon sequestration. 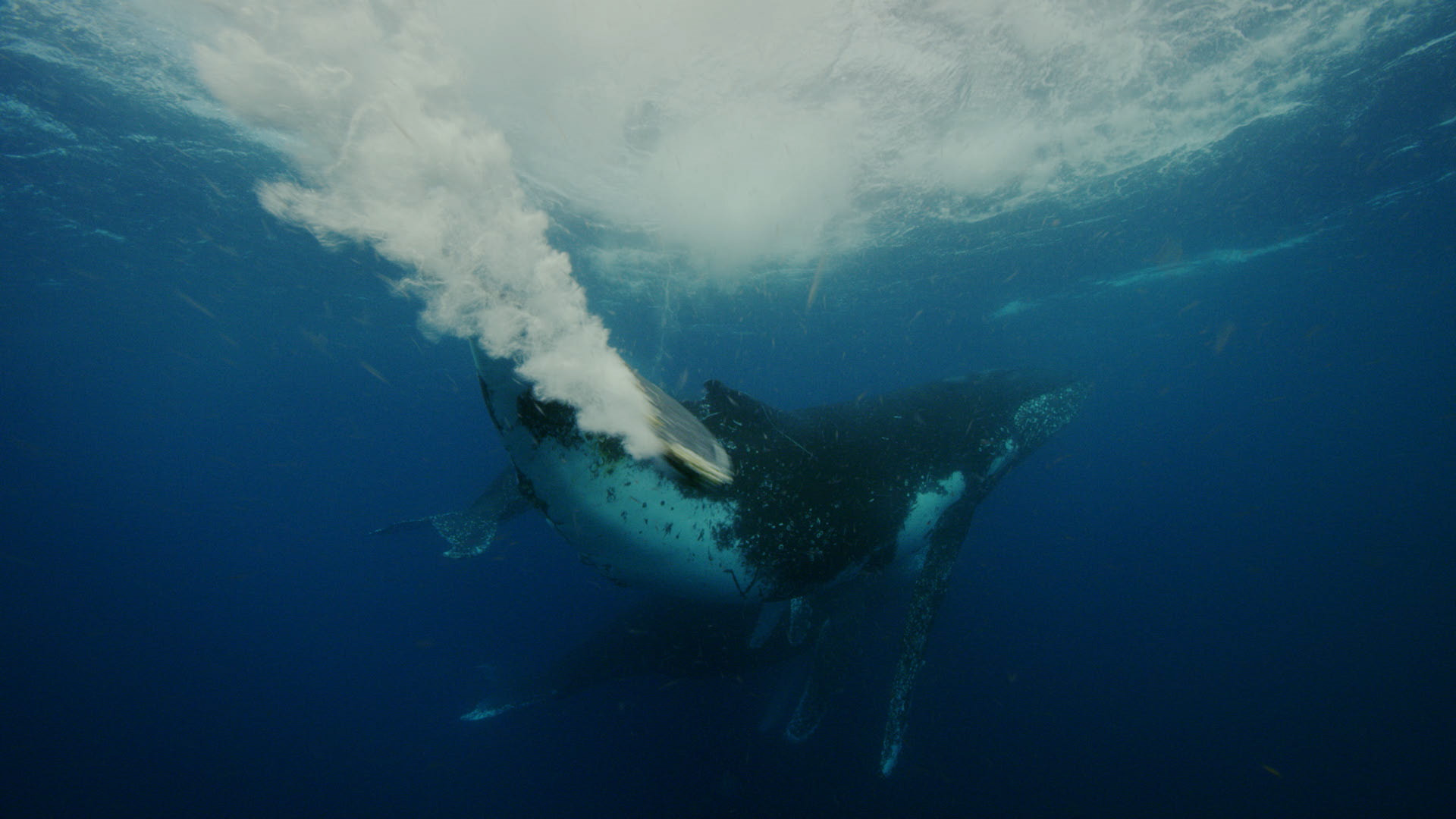 Although female humpbacks are larger than males, size is not an accurate indicator to differentiate sex. The male genital slit is located much higher on the belly, while the female is more toward the fluke, alongside her characteristic hemispherical lobe (a grape-fruit-sized lobe). 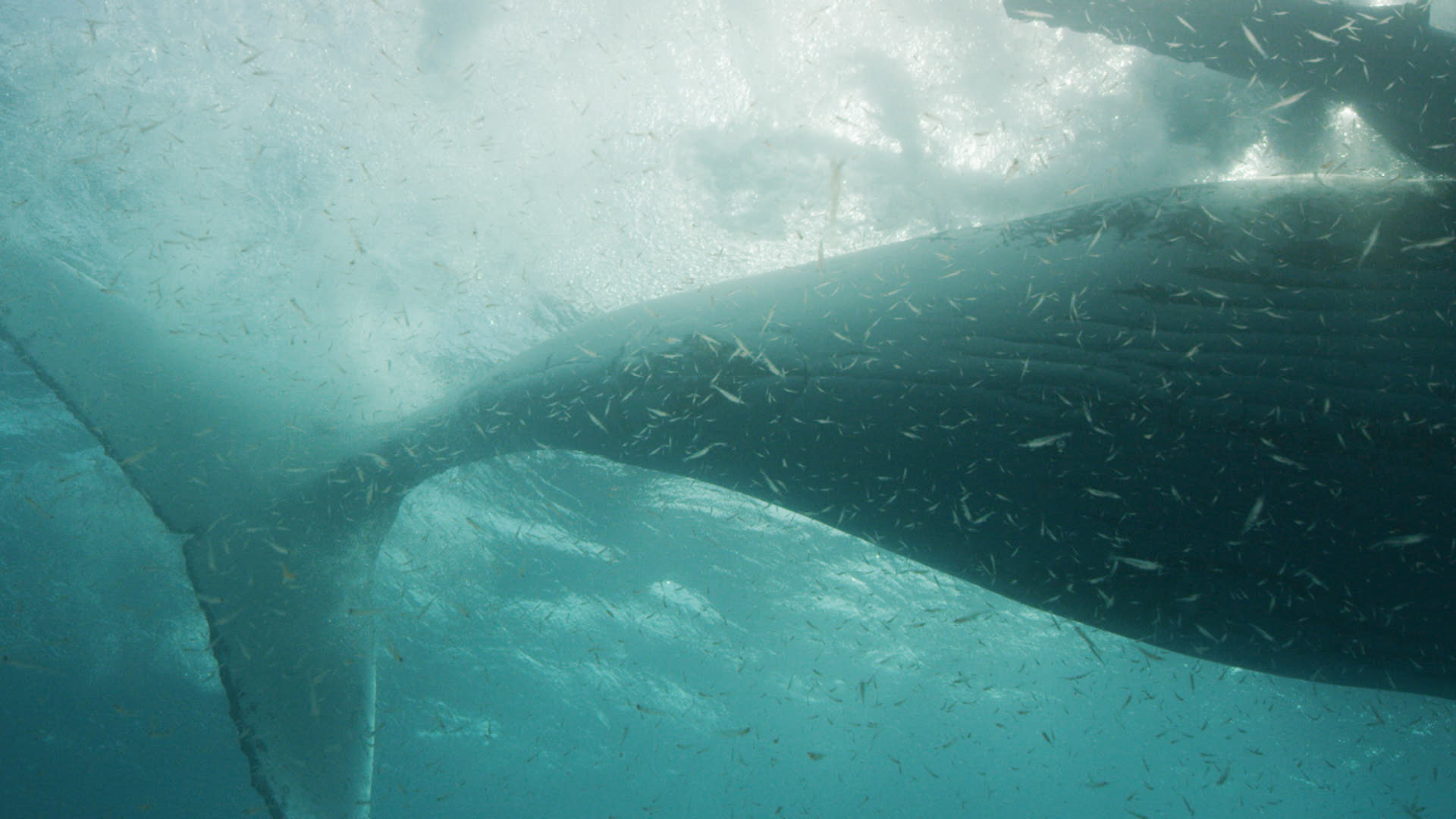 Climate Change has a direct impact on the Krill and Plankton abundance. In areas where sea surface temperatures are warming and krill abundance is falling, food sources become more scarce for Humpbacks. 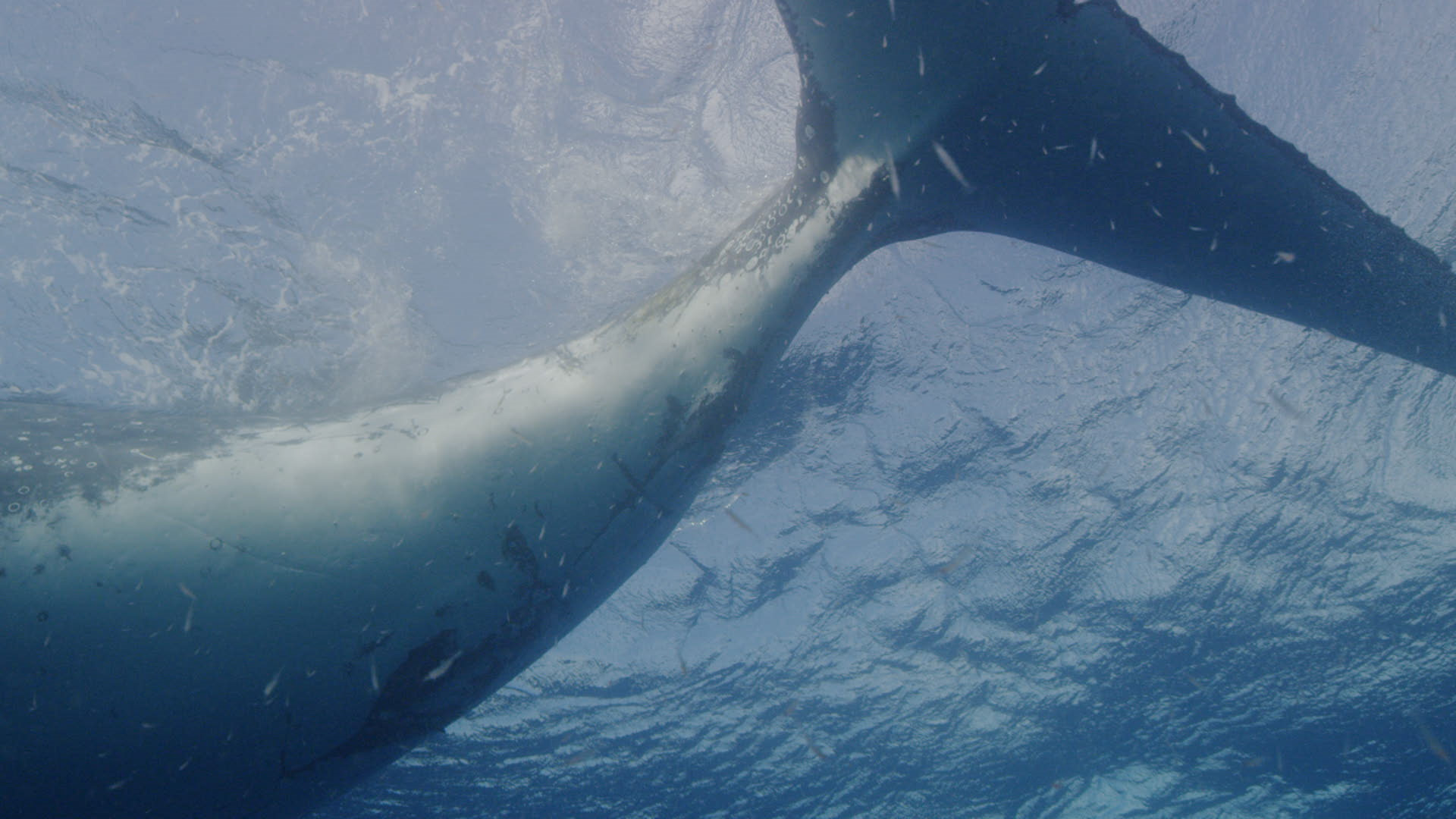 Humpbacks have no bones or cartilage that extend to their flukes. Instead, their flukes are made of connective tissues and surrounded by arteries and veins that contribute to their body temperature regulation. 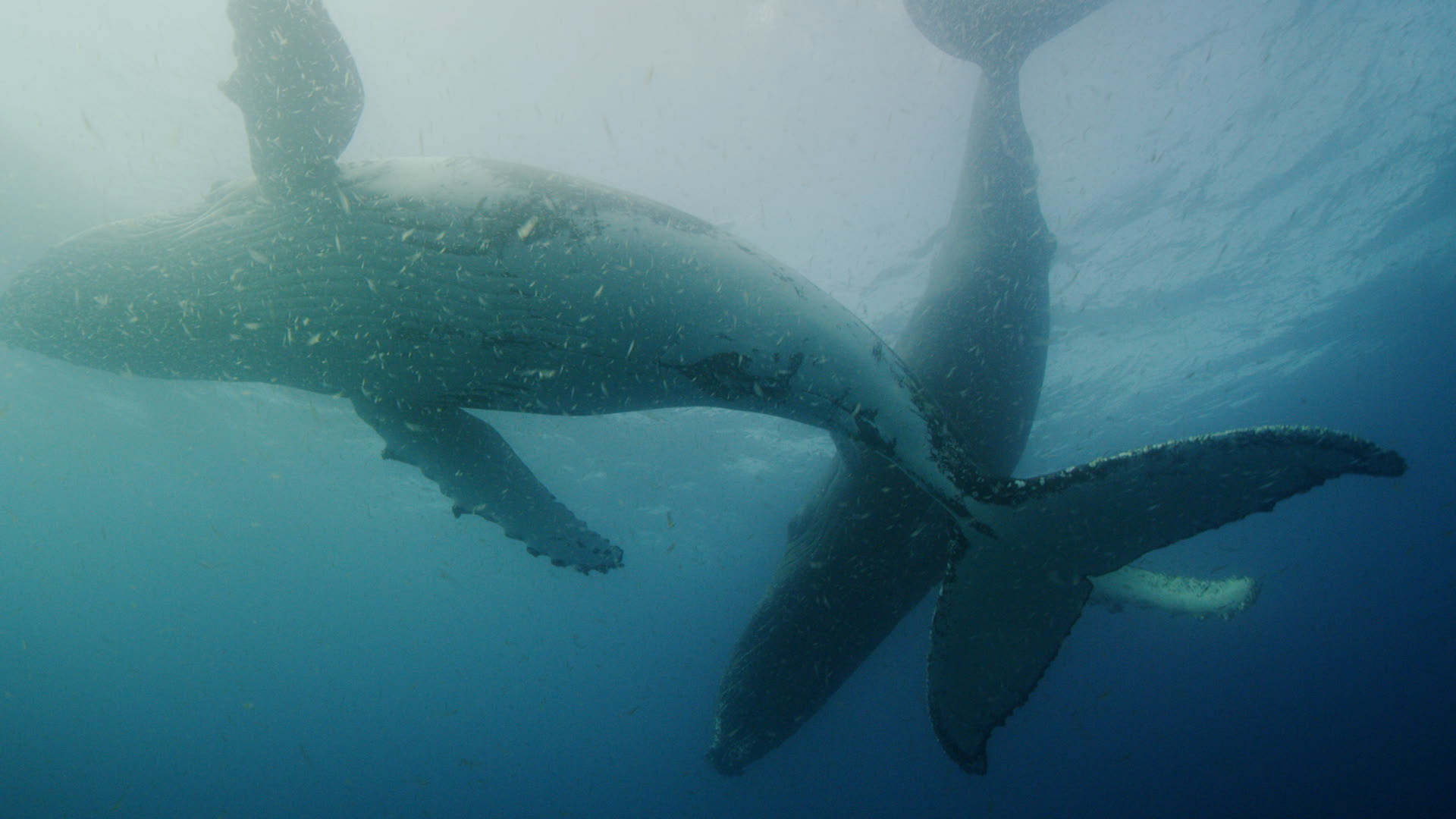 Humpback whales are famed for their complex singing and sophisticated melodies that extend for hours at a time. Only the males sing, leading scientists to believe the songs are part of their mating rituals. 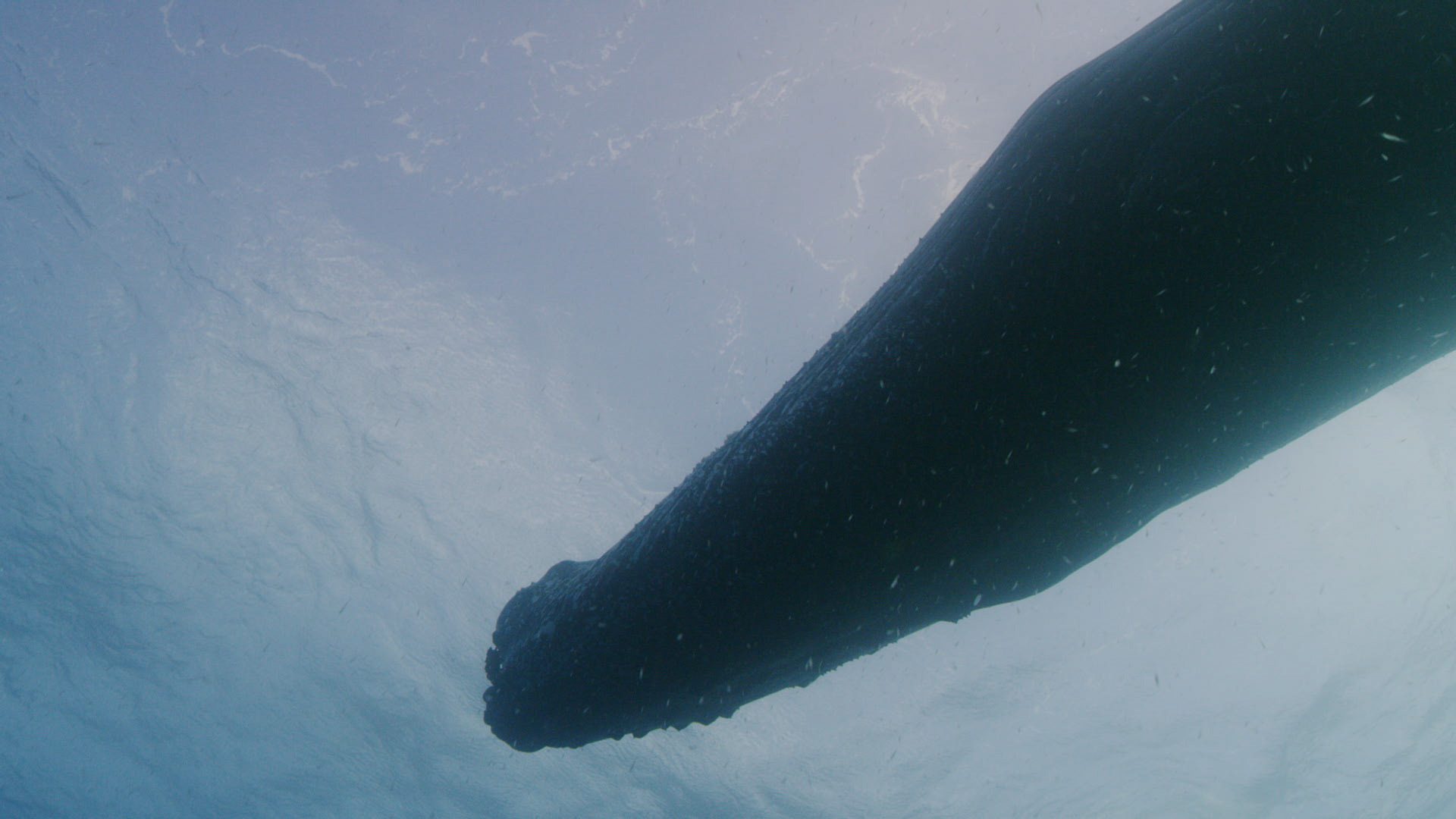 Female humpbacks can get pregnant every 2-3 years and are pregnant for 11-12 months at a time. Once the calves are born (via live birth), they remain with their mothers and feed on their milk for the following 7 months. 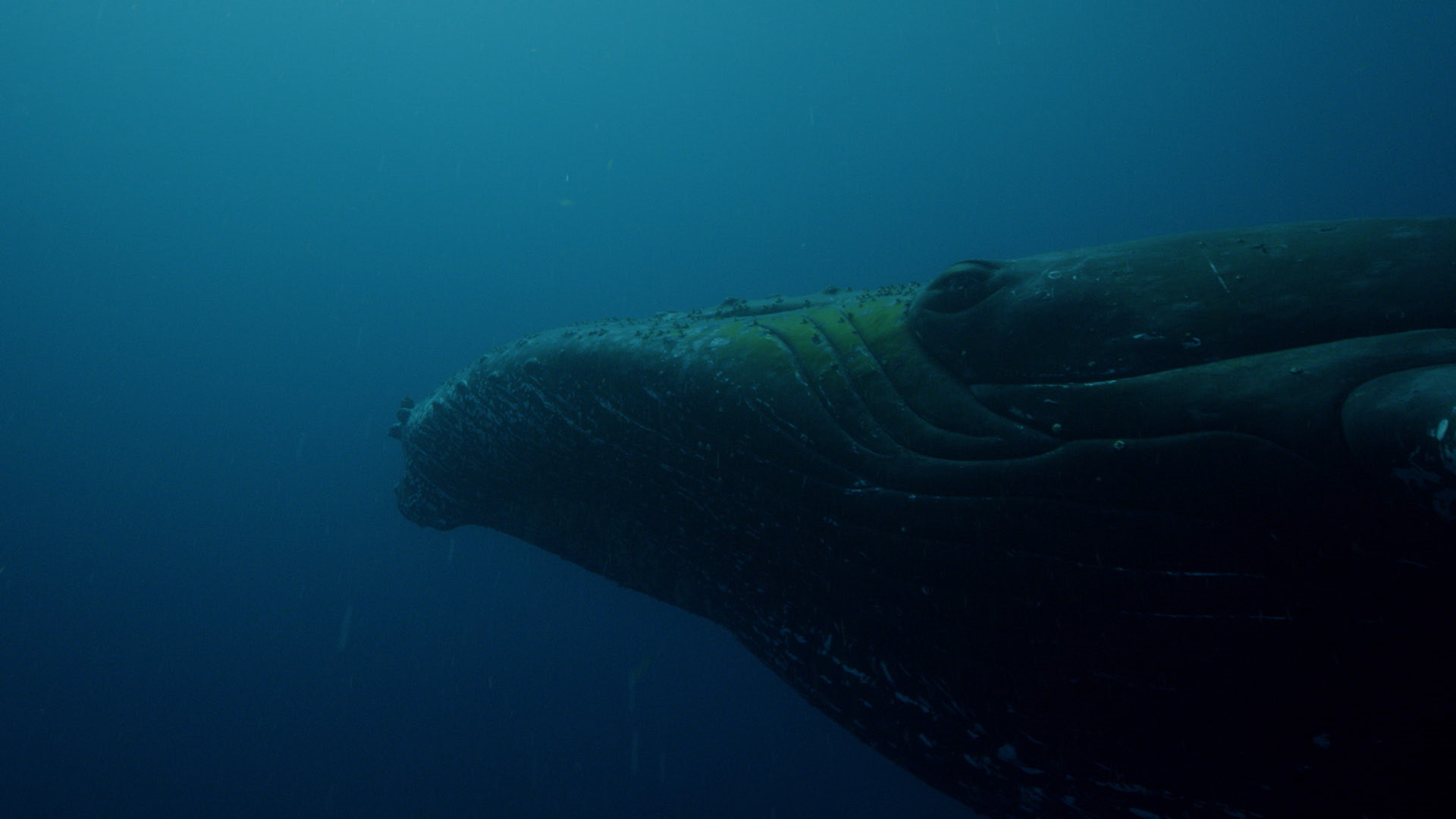 Compared to humans, Humpback whales have poor eyesight. They have dichromatic vision, meaning they are colourblind and can only see shades of grey, as opposed to contrasting greens and reds.

Humpback whales inhabit all major oceans worldwide. Although deemed the same species, there are 16 different populations. Aside from the remote Arabian Sea population, all embark on tremendous journeys each year to migrate between their feeding and their calving and breeding grounds. Their feeding grounds are accentuated by icy cold and productive waters, where krill and plankton thrive. On the other hand, their calving, breeding, and nursing grounds comprise more Tropical environments. Some Humpback populations travel over 8,000 kilometres for their seasonal migration.