Browse & download a collection of underwater footage covering the annual sardine run shot on the East Coast of South Africa. 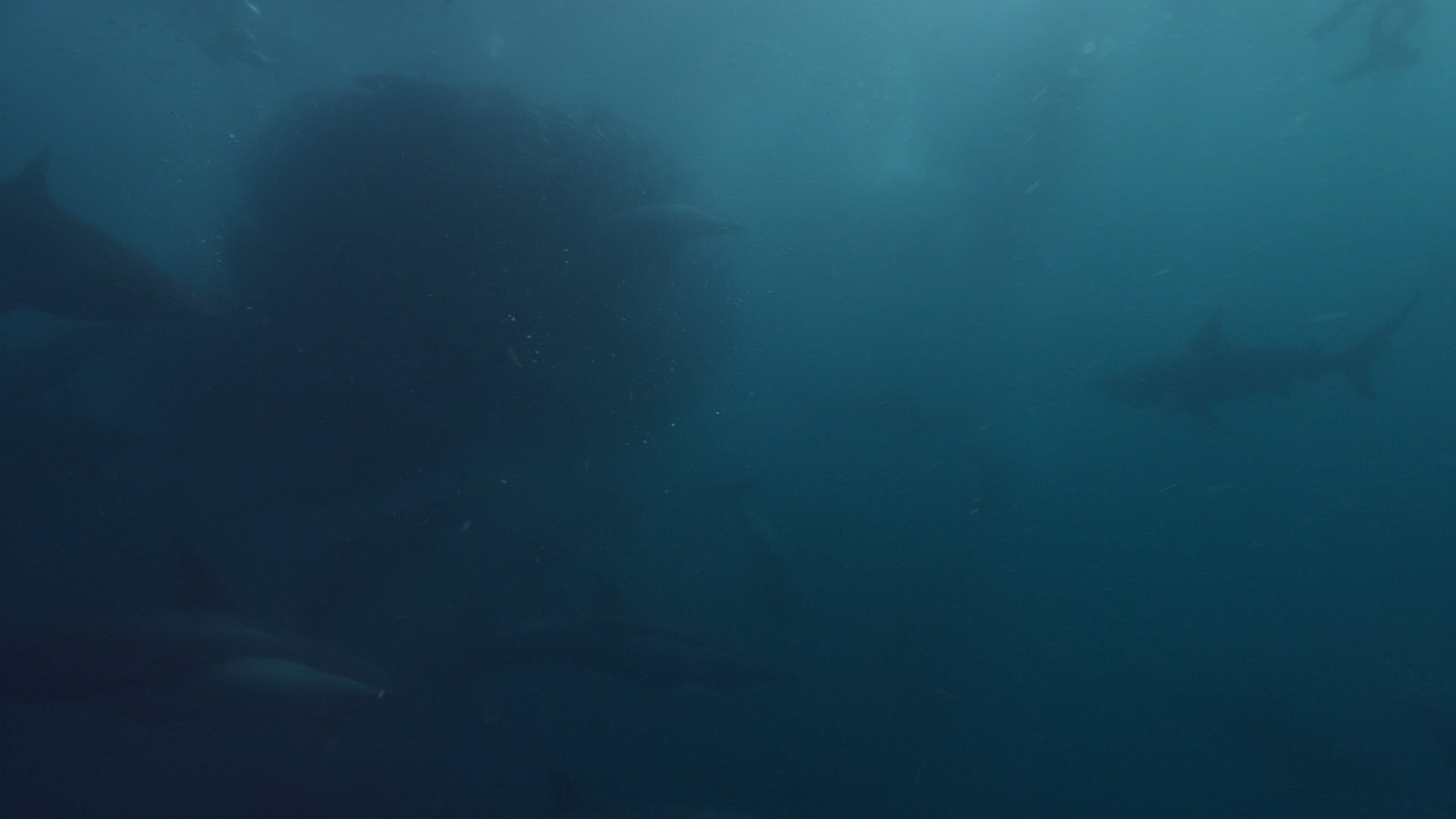 The oldest known documentation of the Sardine Run dated back to 1853 and was printed in a local newspaper once titled the Natal Mercury (now, The Mercury) in Durban, South Africa. 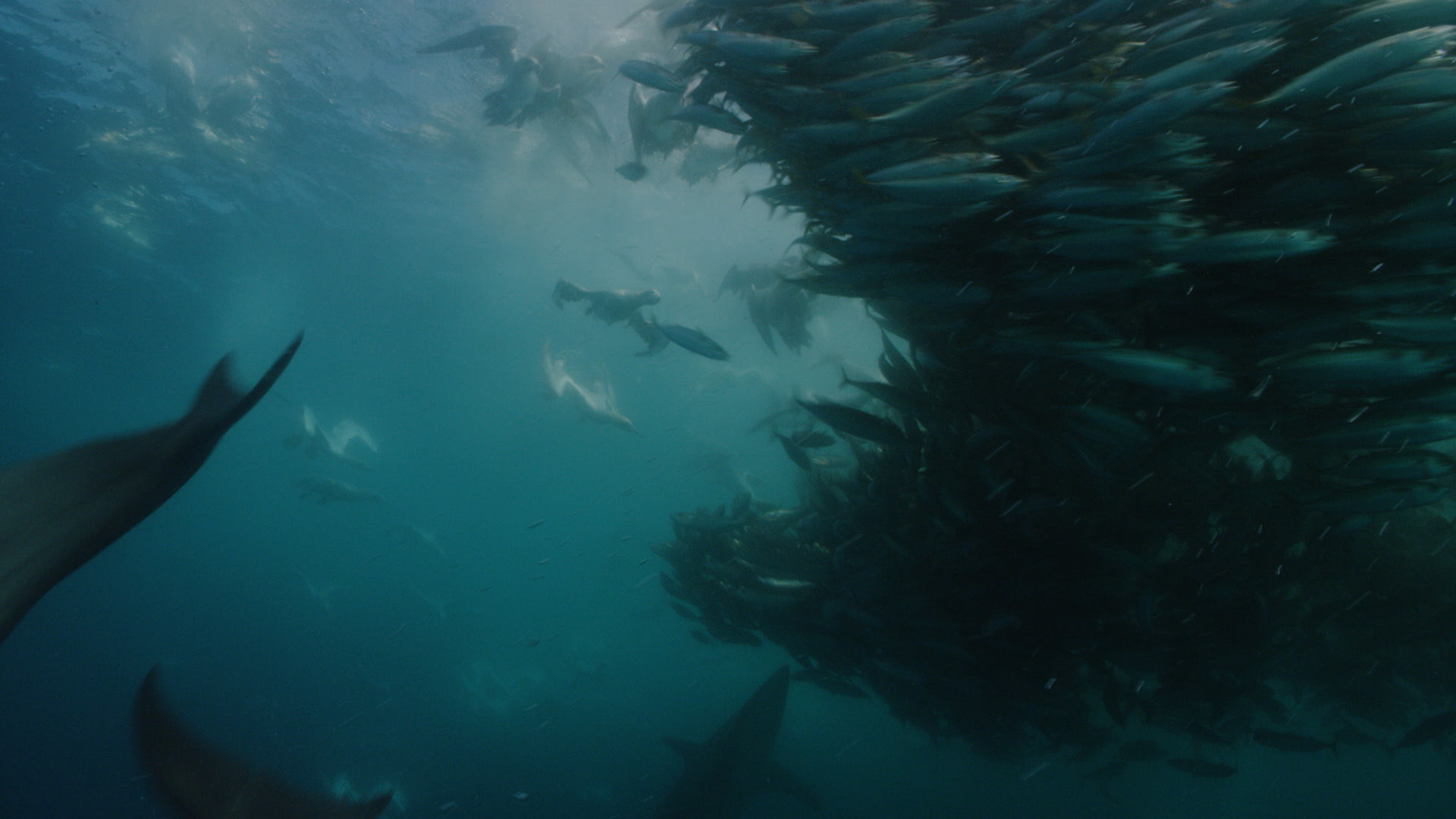 The Cape Gannet has a perilously small breeding range. Moreover, the cape gannet is listed as a vulnerable species due to habitat destruction, pollution, and massive shifts in prey populations (induced by over-fishing). 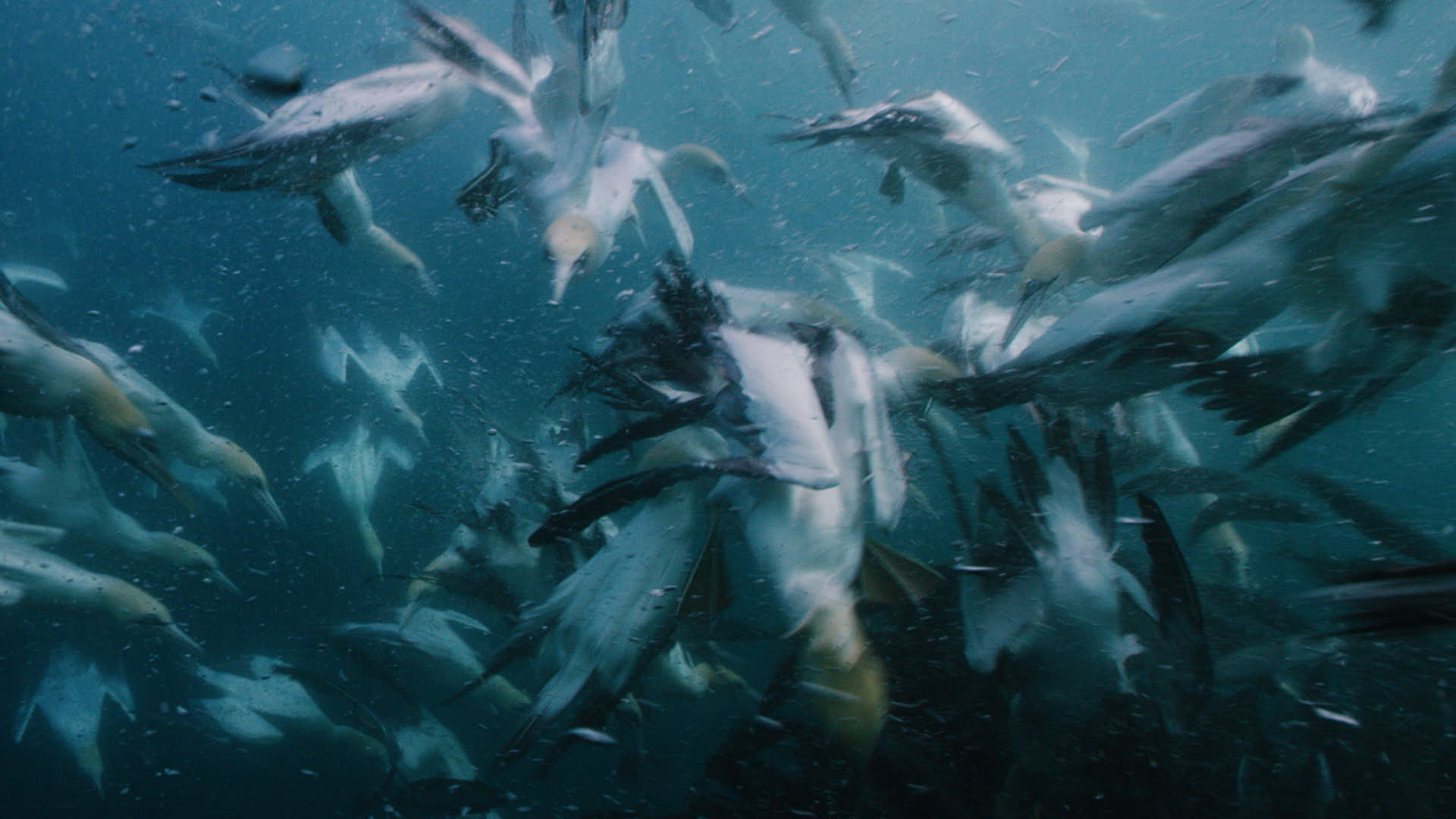 Cape Gannets cover significant ground to forage. Daily, foraging aggregations can cover over 450 kilometres in the pursuit of food. Nowadays, it is common for gannets to crowd around and feed from vessel discards. 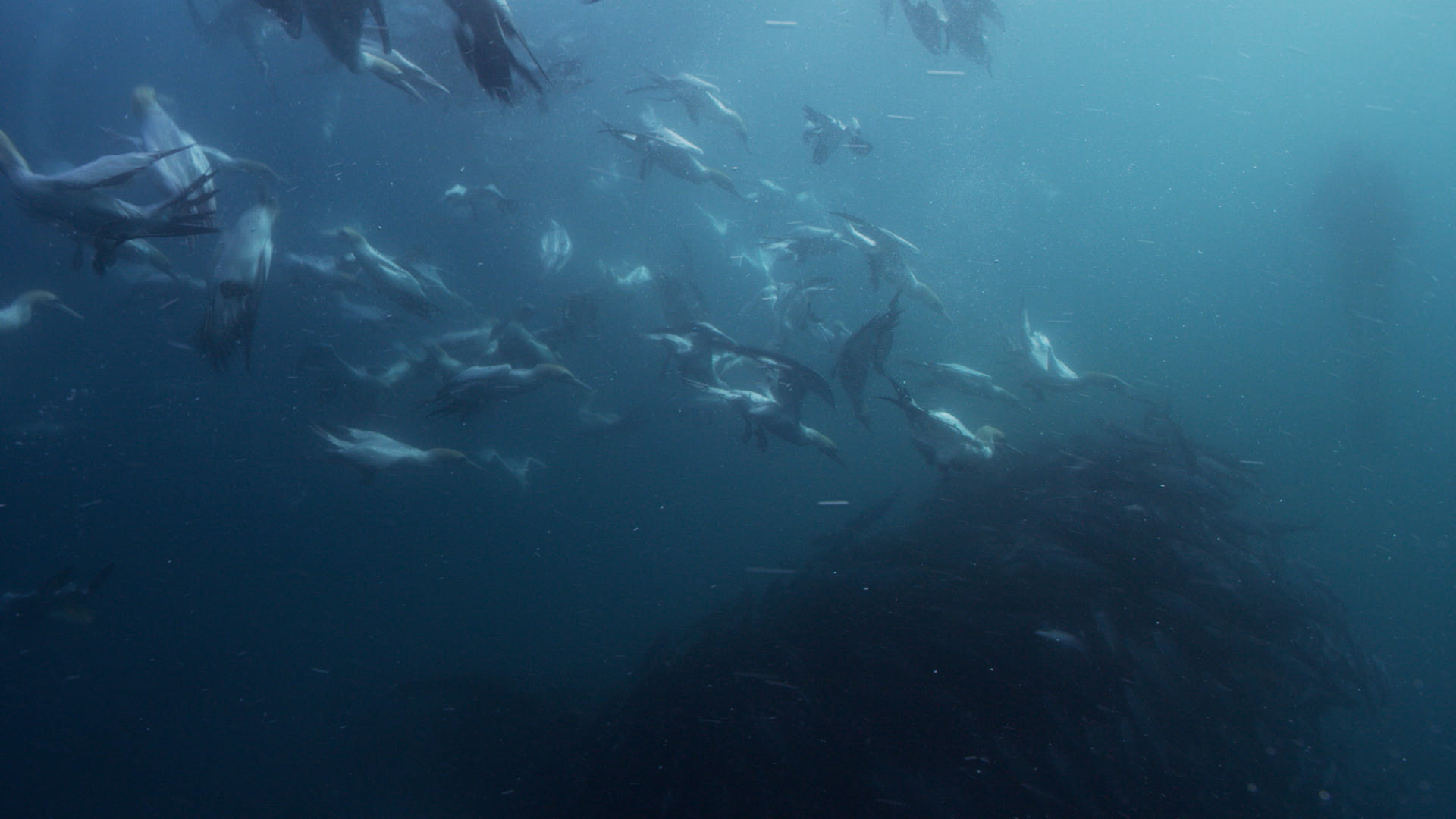 Cape Gannets have adaptations that underpin their awe-inspiring underwater hunts. Their webbed feet and streamlined body propel them through the sea, and their absence of external nostrils inhibits water from being forced into their cranium during their powerful dives. 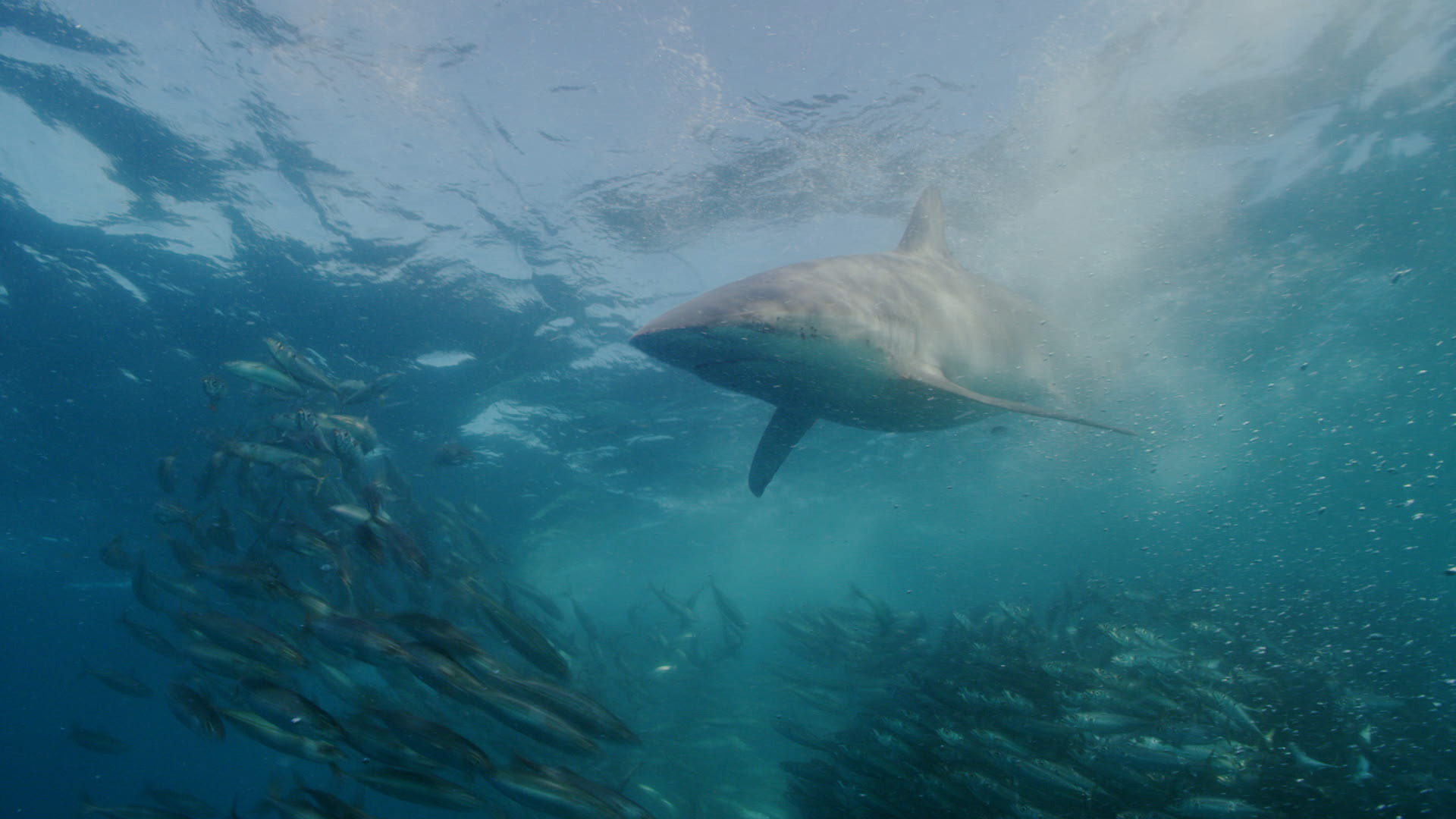 Many humans nutritionally depend on sardines. Small-pelagic species (including round herring, anchovies, and mackerel as well) comprise one-quarter of the world’s catch. 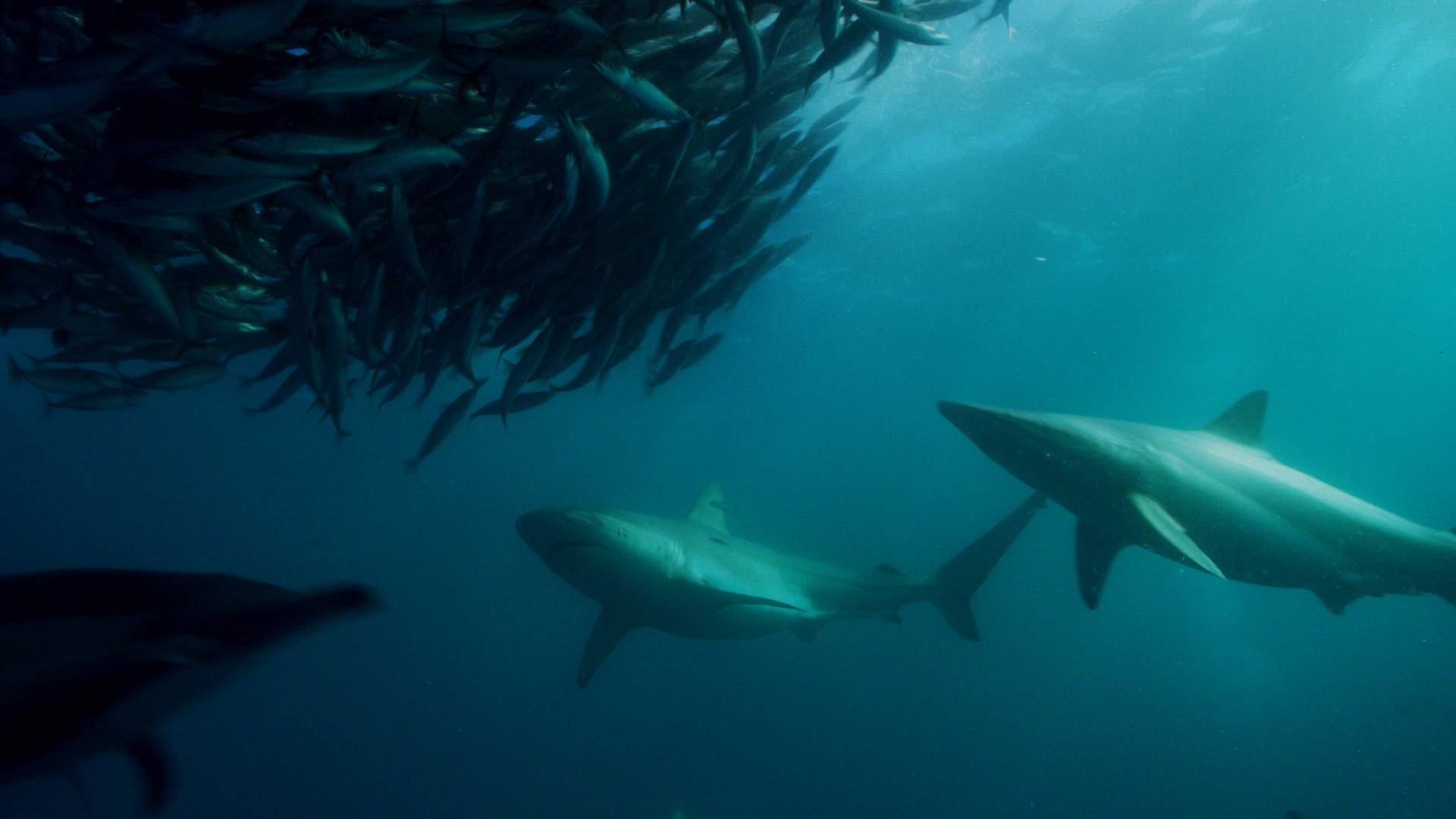 Dusky sharks are commercially valuable, primarily owing to their highly sought-after fins for the infamous and culturally significant shark fin soup. In addition to their marketability, they are frequent victims of bycatch. 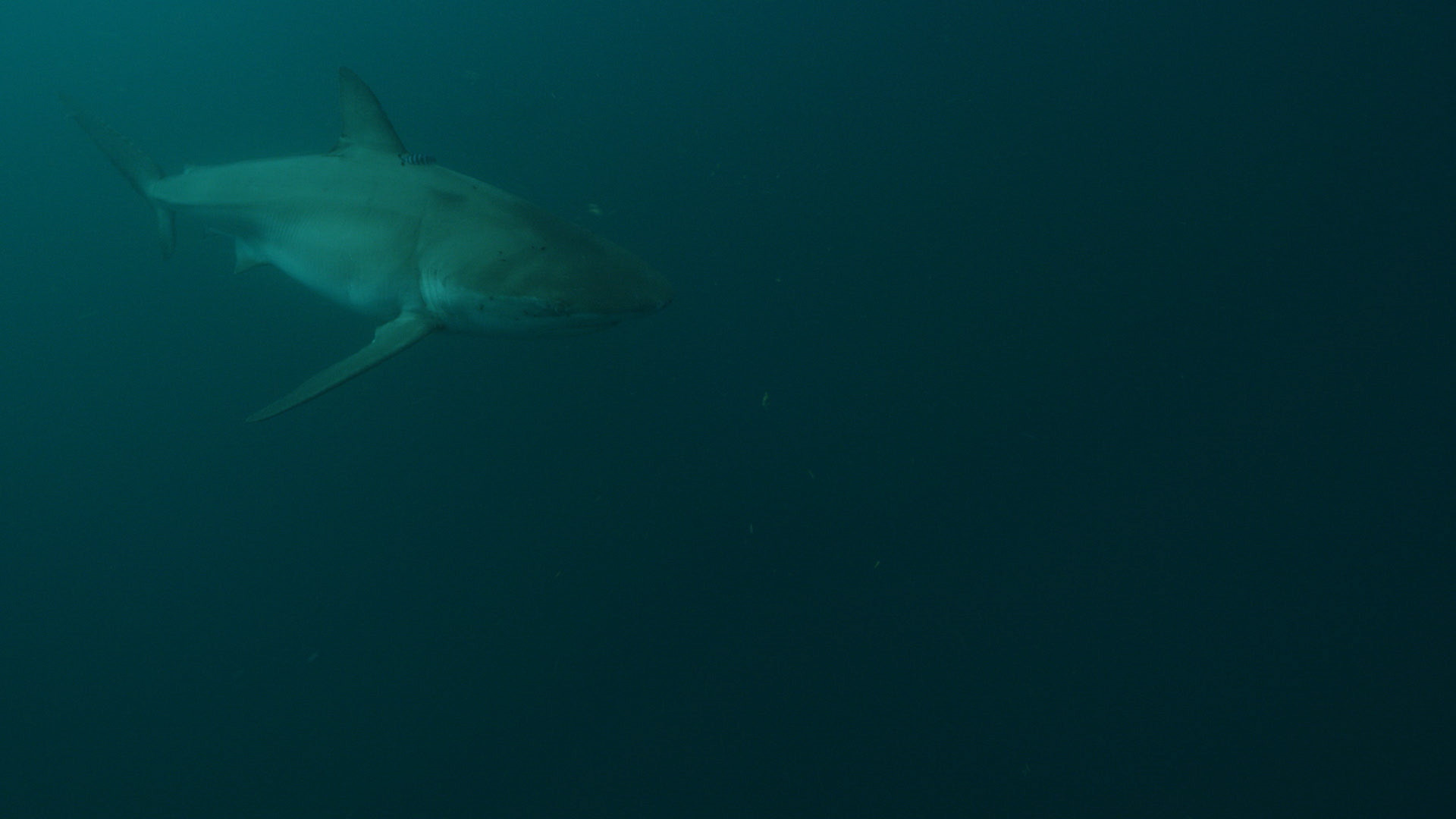 Dusky sharks are a long-lived and slow-growing species, living up to fifty years in age but taking up to 23 years to sexually mature. Such age characteristics are deemed worrisome in light of conservation. 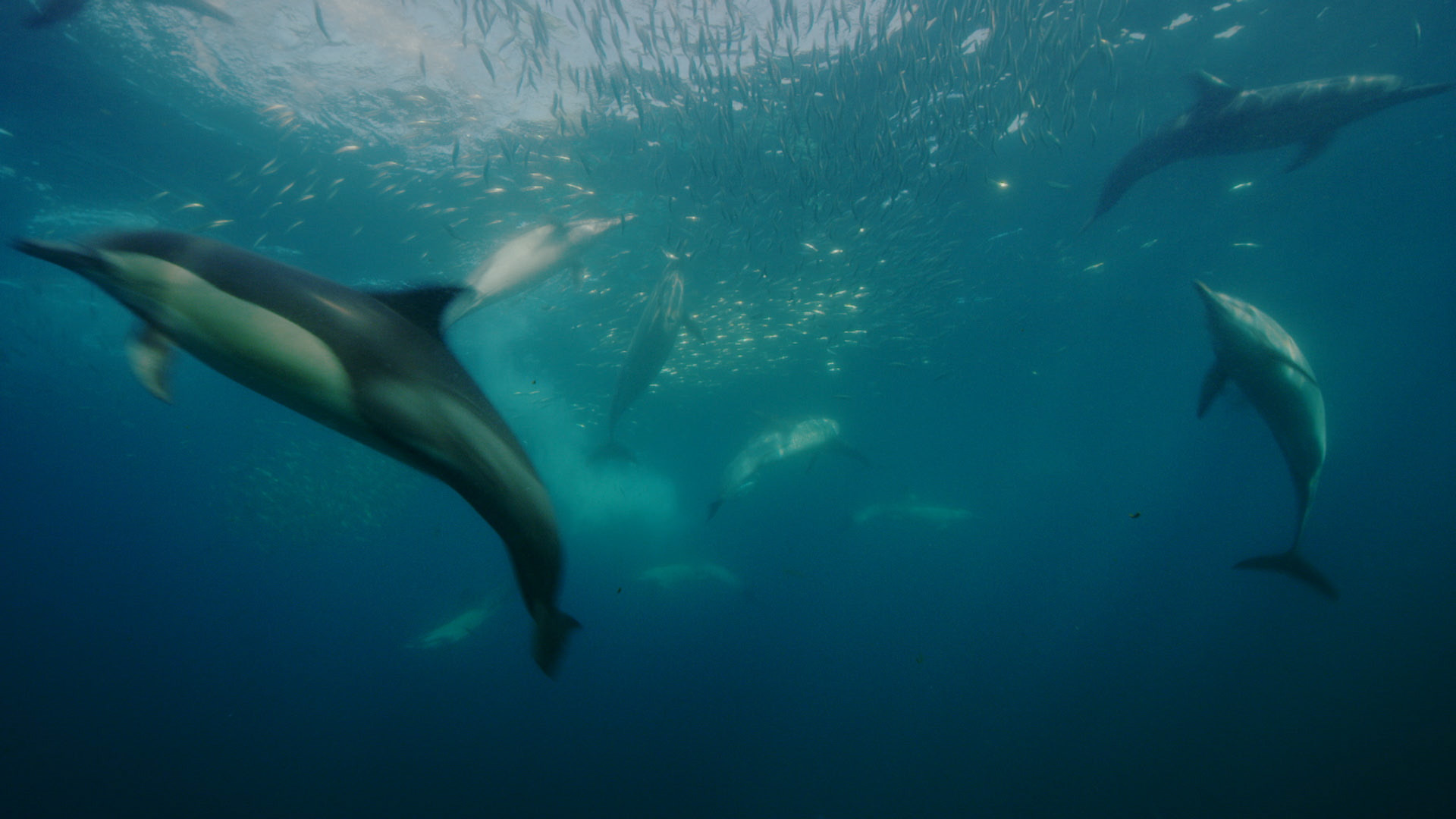 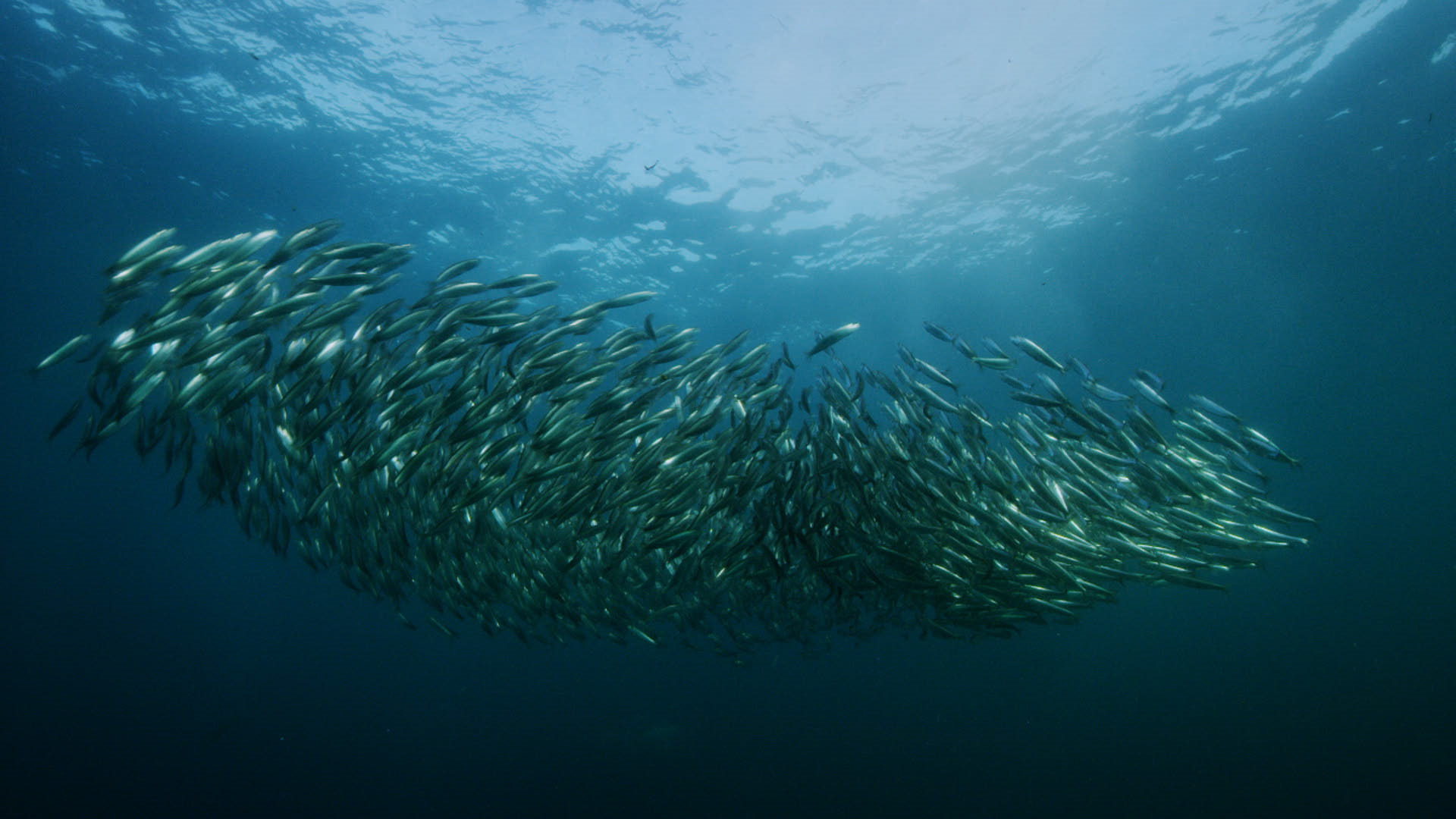 The sardines' innate drive propels them to form these magnificent shoals, or baitballs, out of defence. Aggregating in colossal numbers, the individual sardines' likelihood of being consumed reduces immensely. 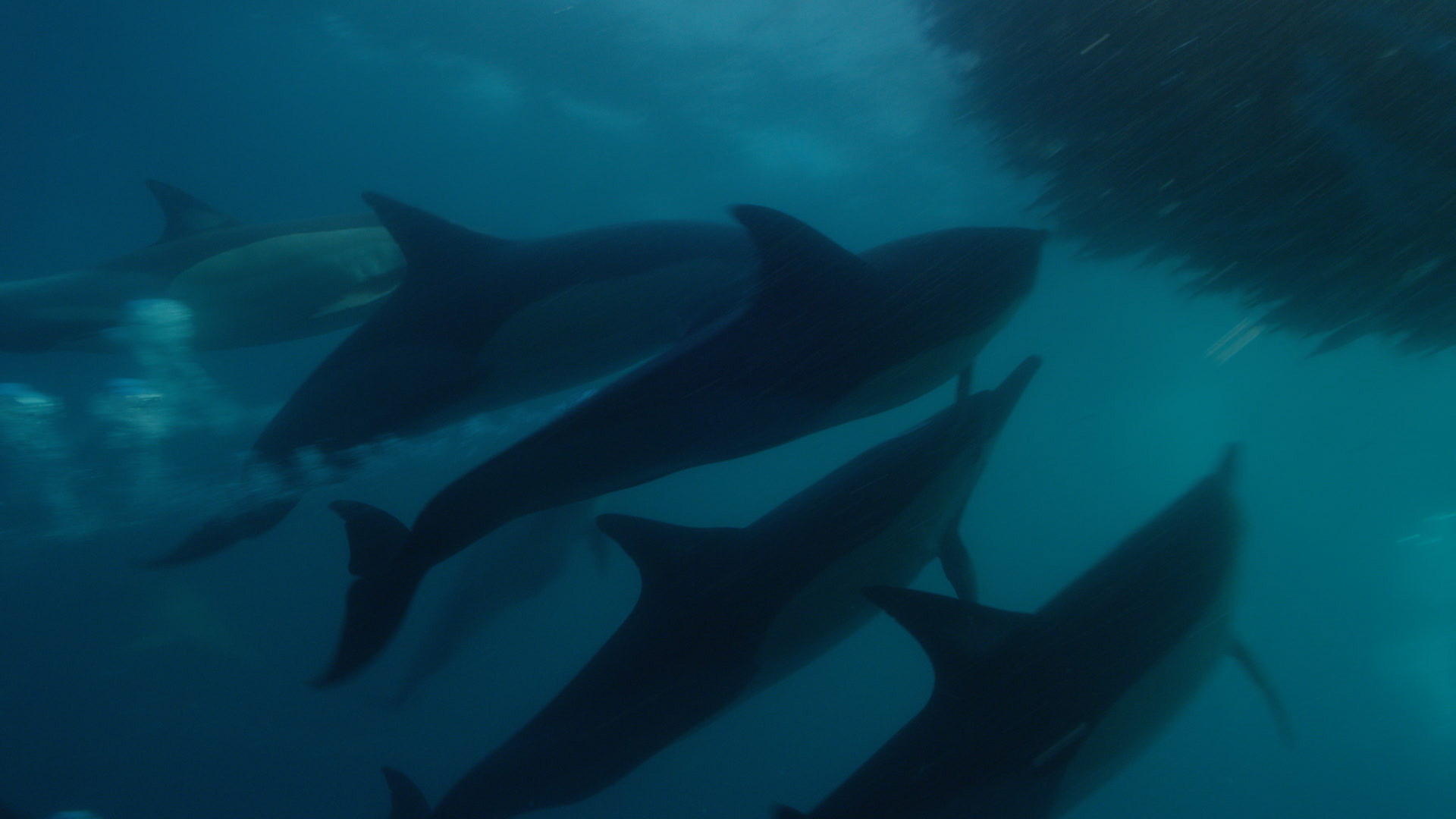 Dolphins are one of the ocean's top apex predators. Although they are not reputed or feared to the scale of an orca or white shark, dolphins are agile, quick, and have the second biggest brain-to-body ratio, making them brilliant predators. 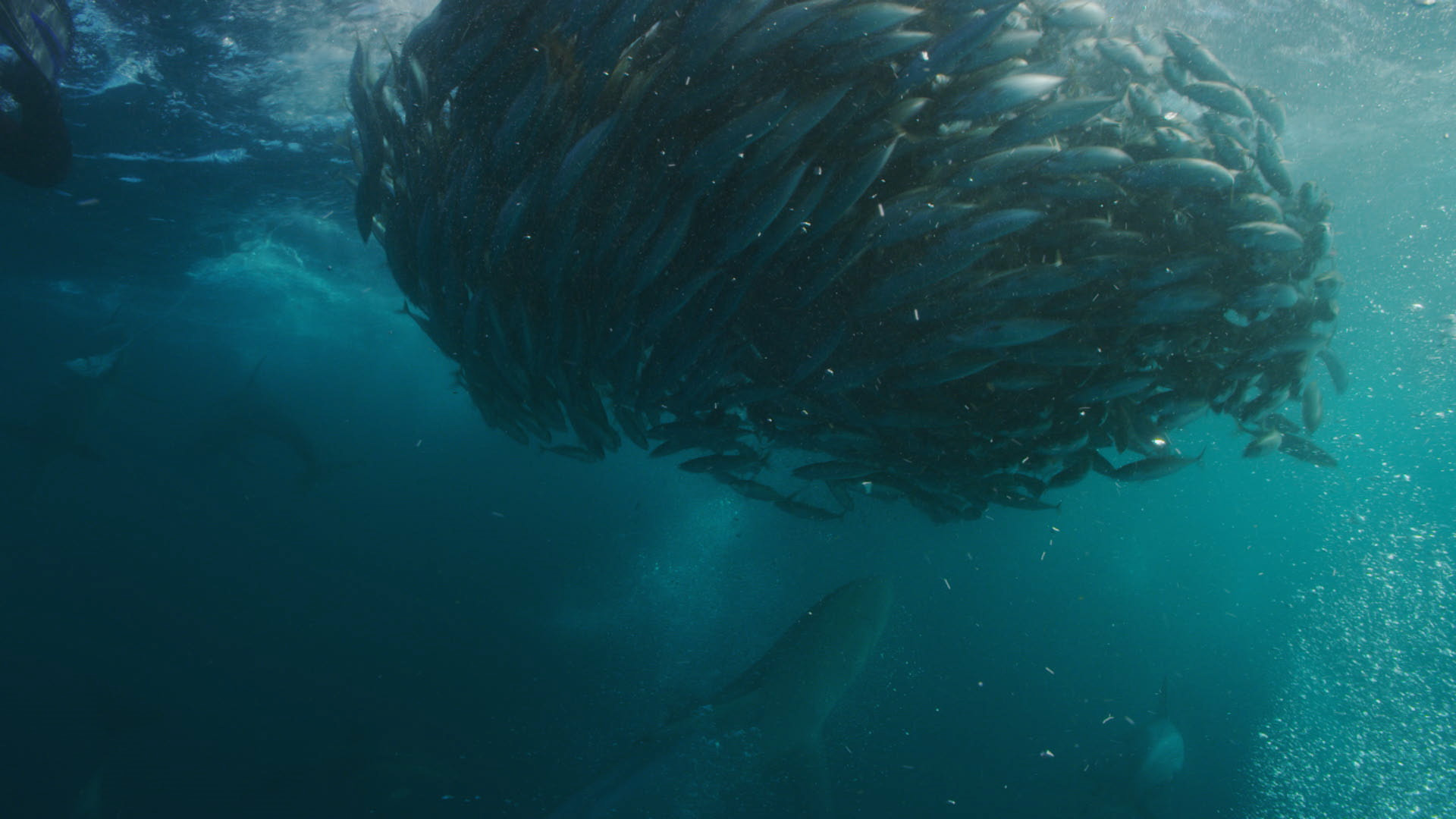 A study on pollution and entanglement in large sharks in Kwazulu-Natal revealed that out of 14 local shark species, the dusky shark was the most frequently entangled. This is plausibly due to their large appetite and frequent eating behaviours. 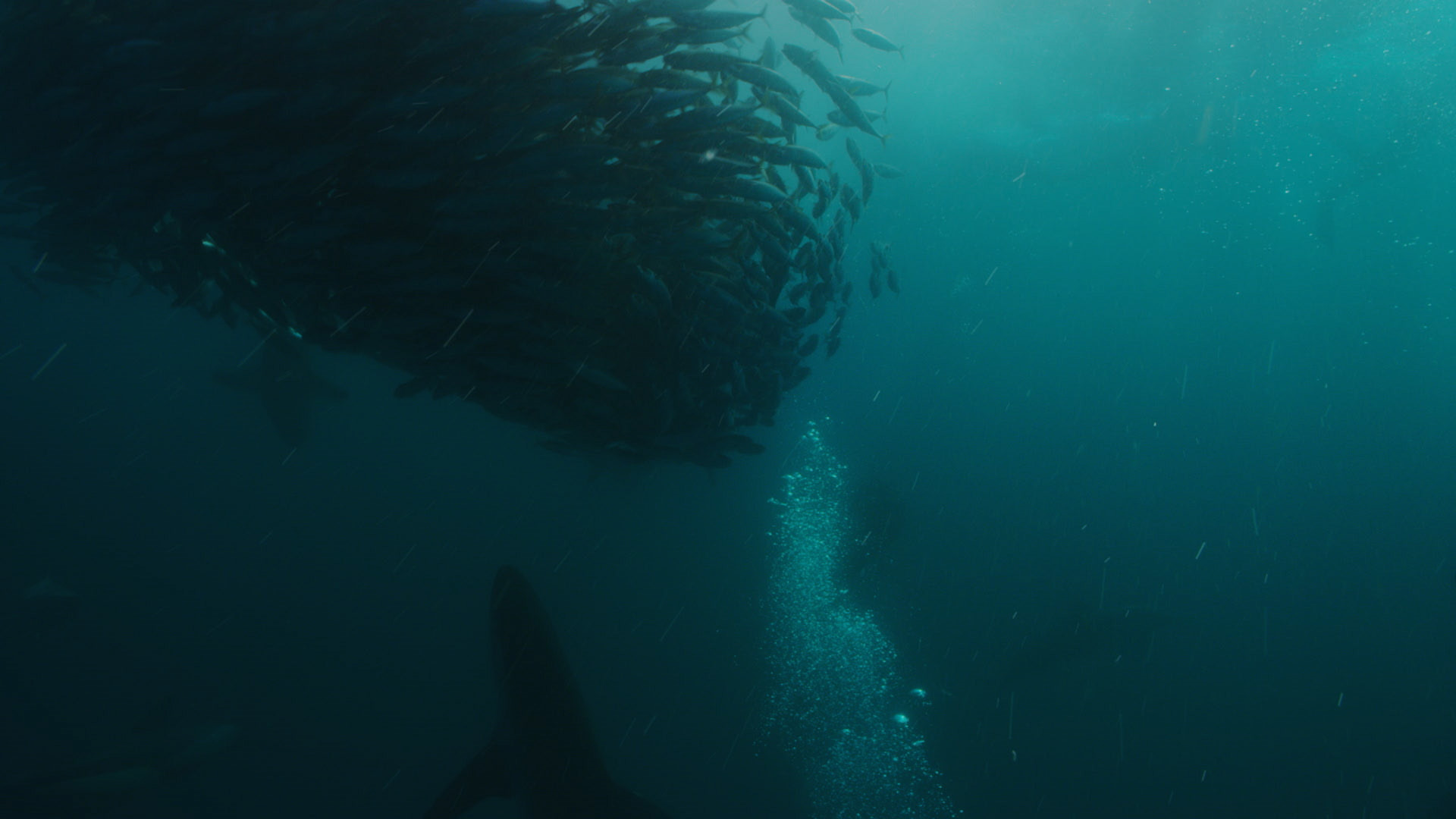 One explanation for the notable presence of Dusky Sharks in the grandiose sardine run could be their enormous appetite. Dusky sharks can eat up to ten percent of their body weight at once, proving the massive bait-balls to be a 'dusky-appropriate' smorgasbord of sorts. 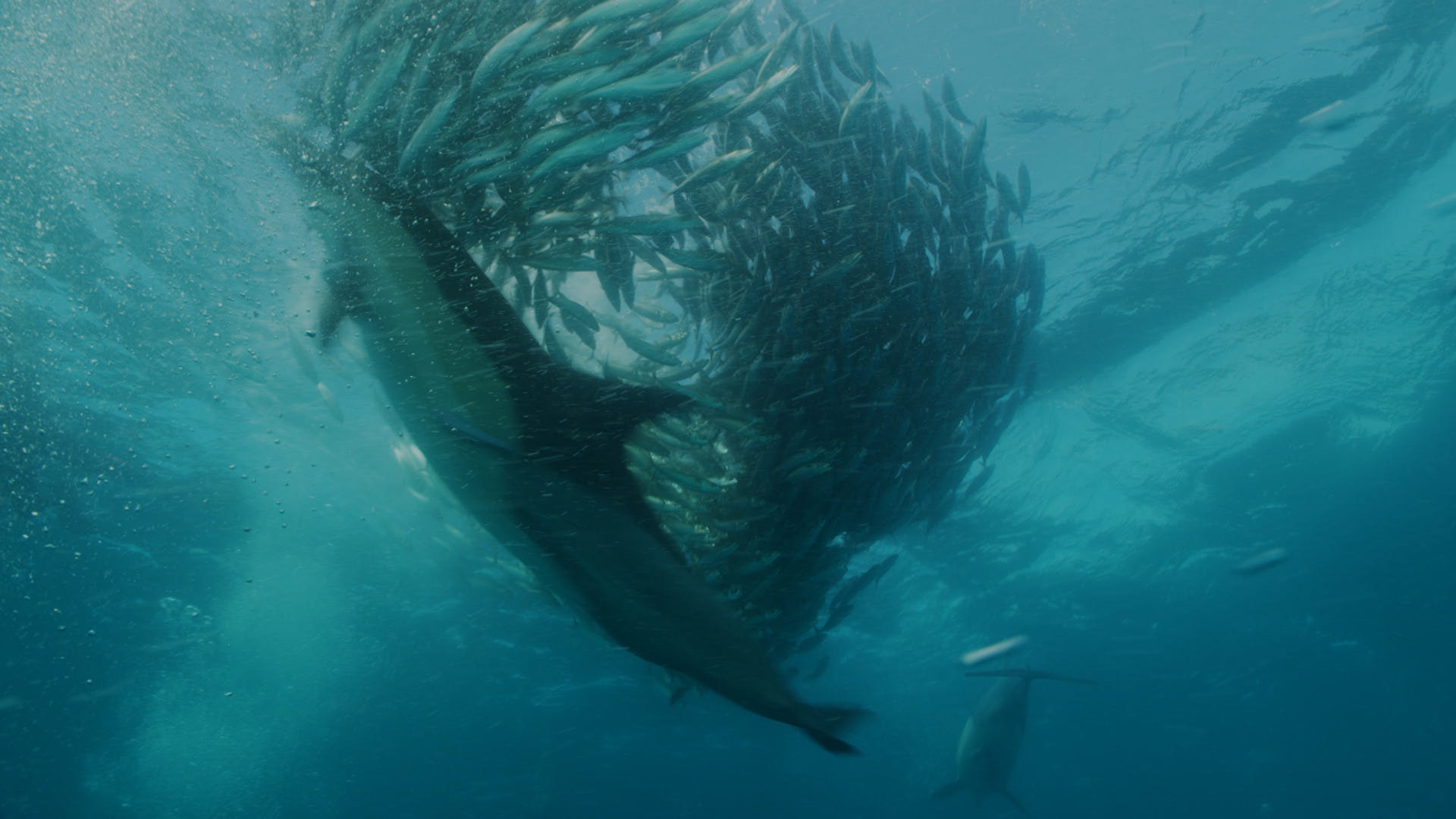 The sardine was a sacred spiritual symbol in many religions, including ancient Christianity. The fish was an emblem of Jesus Christ and represented his resurrection, fresh beginnings, fertility, and bounty. 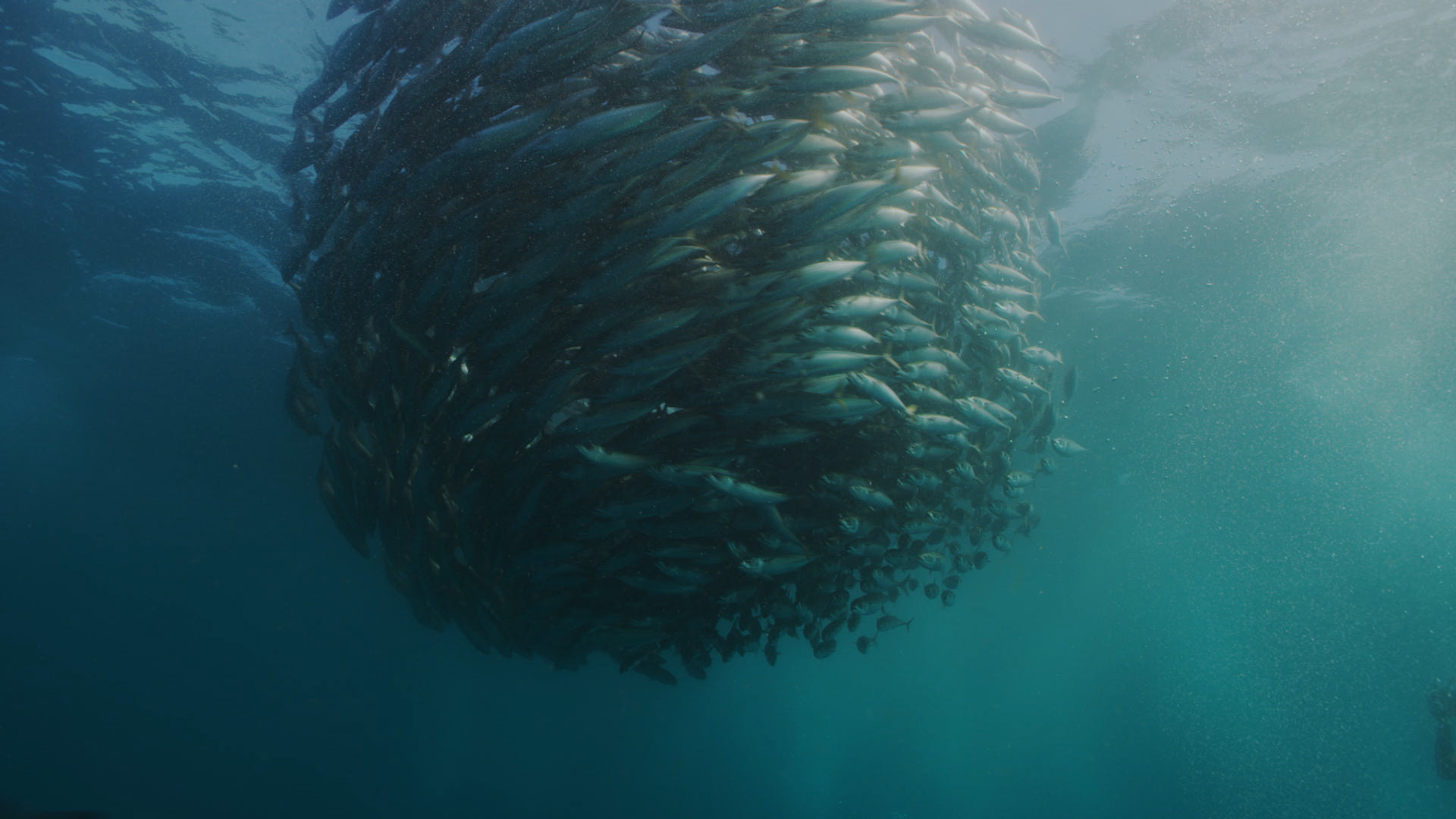 Dolphins are incredibly playful and curious. Although 'play' seems like nonessential behaviour, it is crucial to any animal's neural, locomotive, and social development. Dolphins play, tease, and even carry other animals (such as the toxic pufferfish). 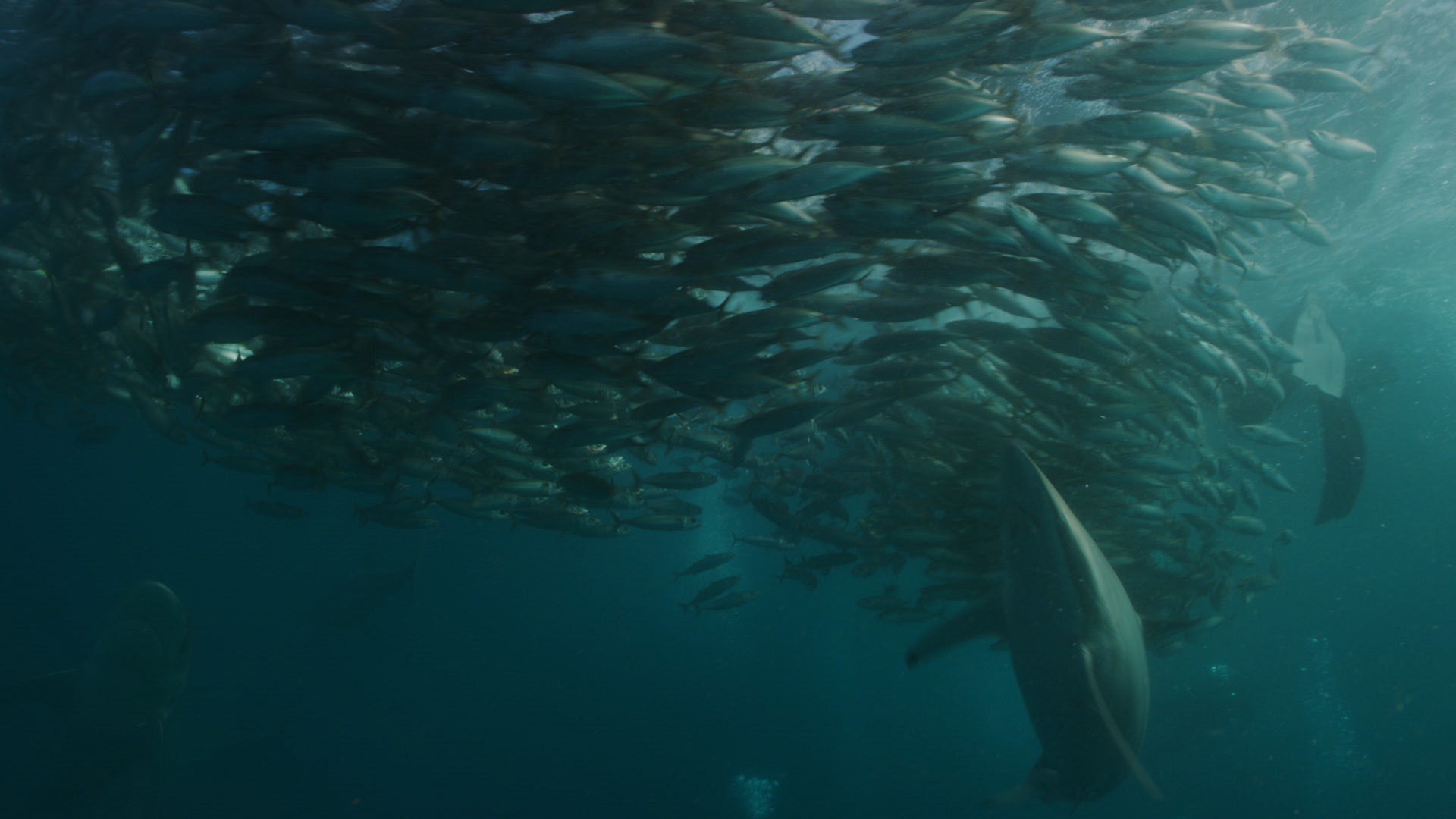 Dusky sharks are not aggressive towards humans or, for the most part, even considered dangerous. However, in a baitball-induced feeding frenzy, any 180-kilogram-sized dusky can threaten any unaware or risk-taking diver. 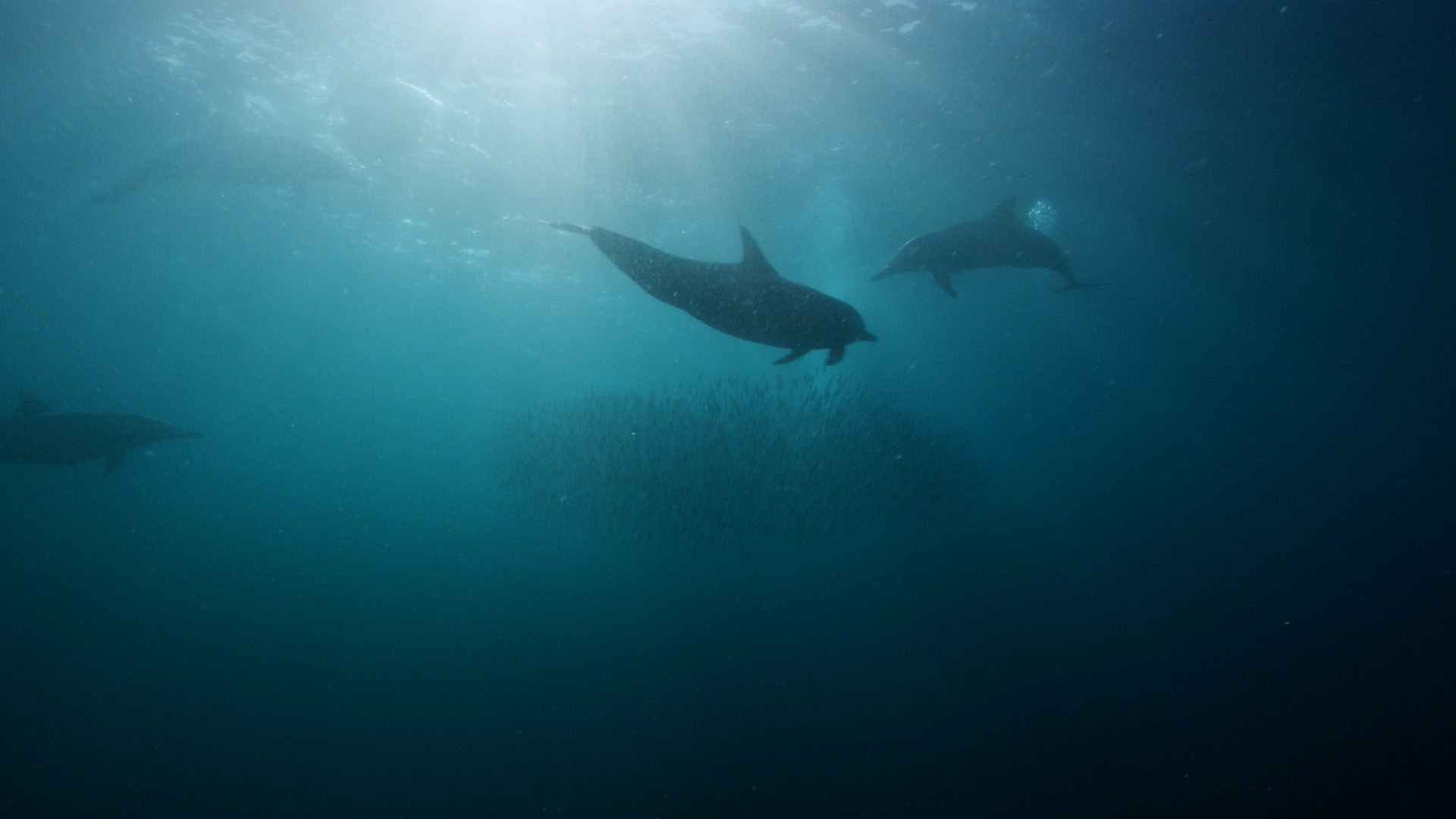 Copper sharks (bronze whalers) and Dusky sharks are both requiem sharks. The easiest way to differentiate between the two species is their teeth formation (copper sharks have more hook-shaped teeth). 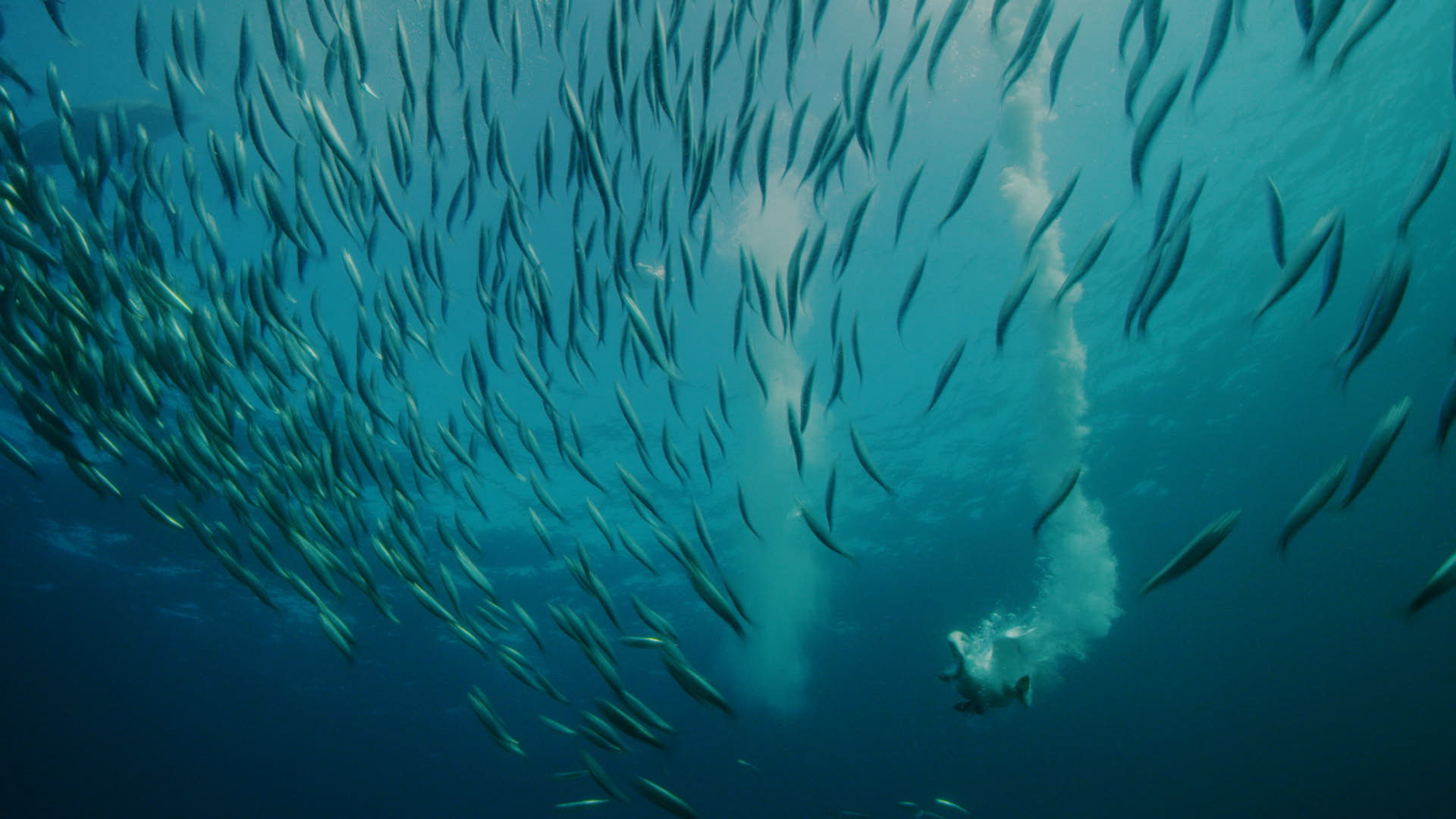 Cape Gannets are renowned for their striking dives. Plunging into the sea at speeds of up to 100 km/hour, the gannets can descend up to 10 metres to secure a meal. 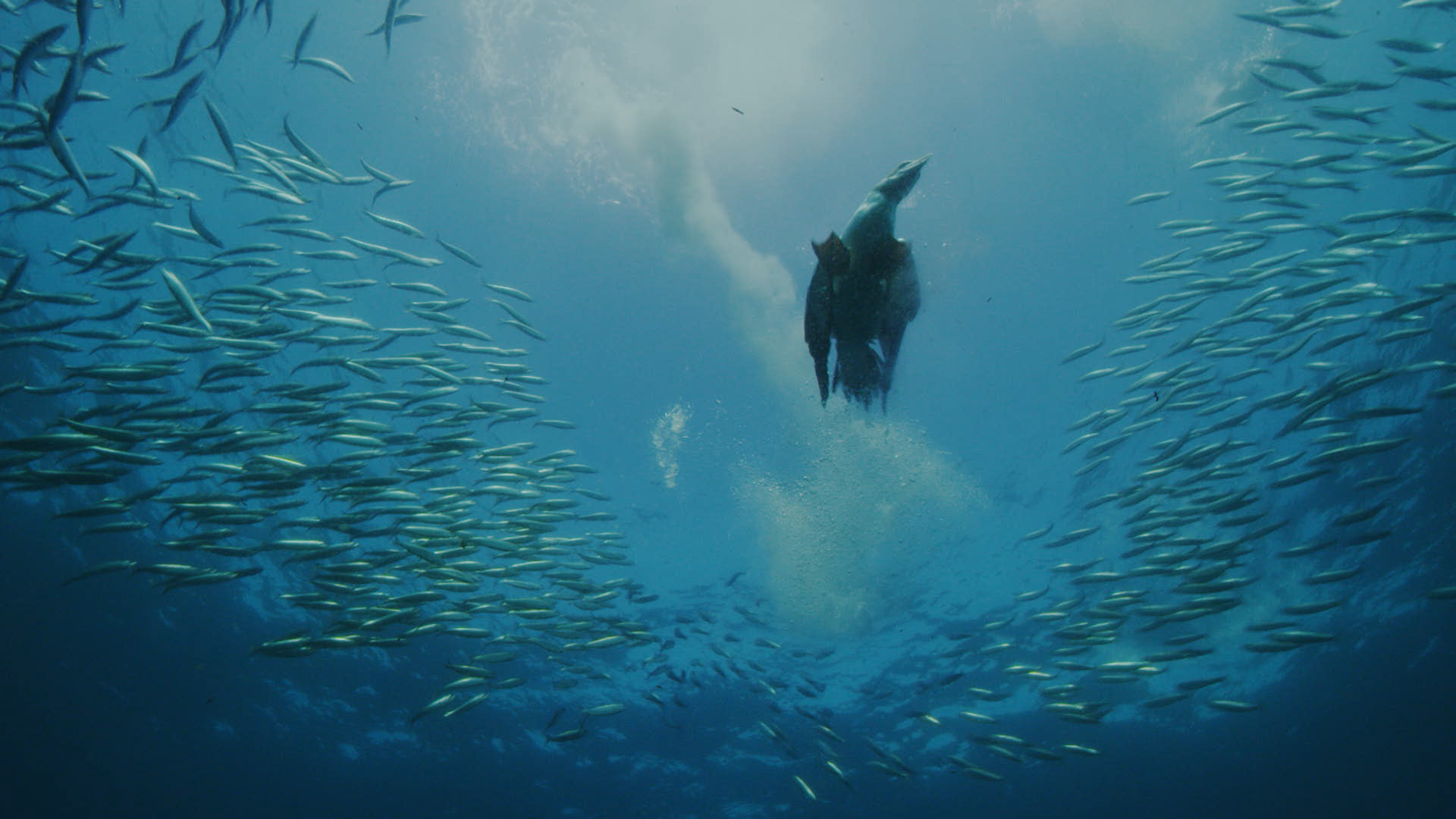 Common dolphins can form social groups (or pods) of thousands of individuals. These groups extraordinarily comprise dolphins of other species, as they share similar distributions and feeding grounds. 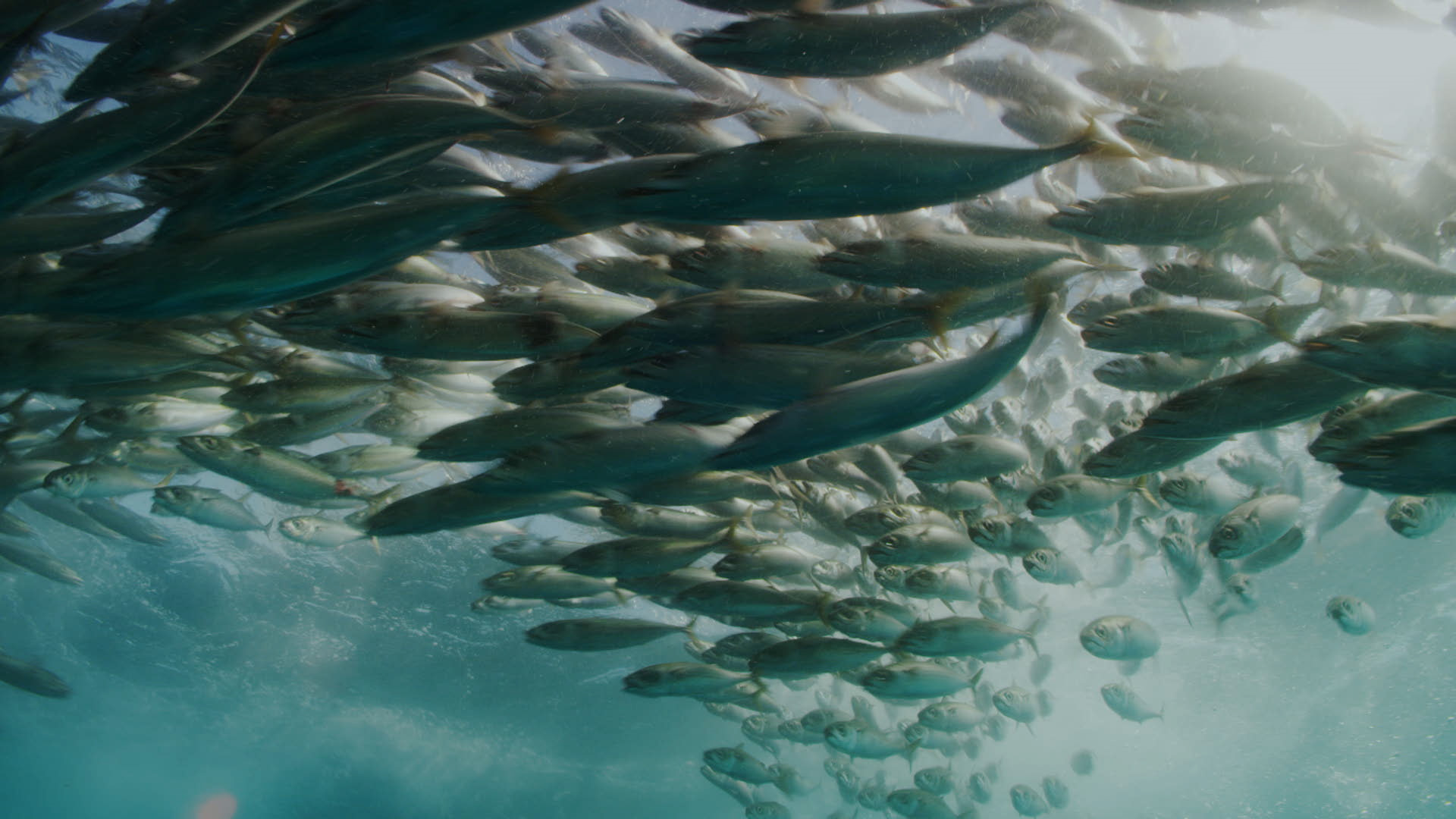 In South Africa, sardines are the main target species for the small pelagic catch. The sardine fishery has been operating since the 1940s and has wreaked havoc and contributed to today’s depletion of sardine populations. 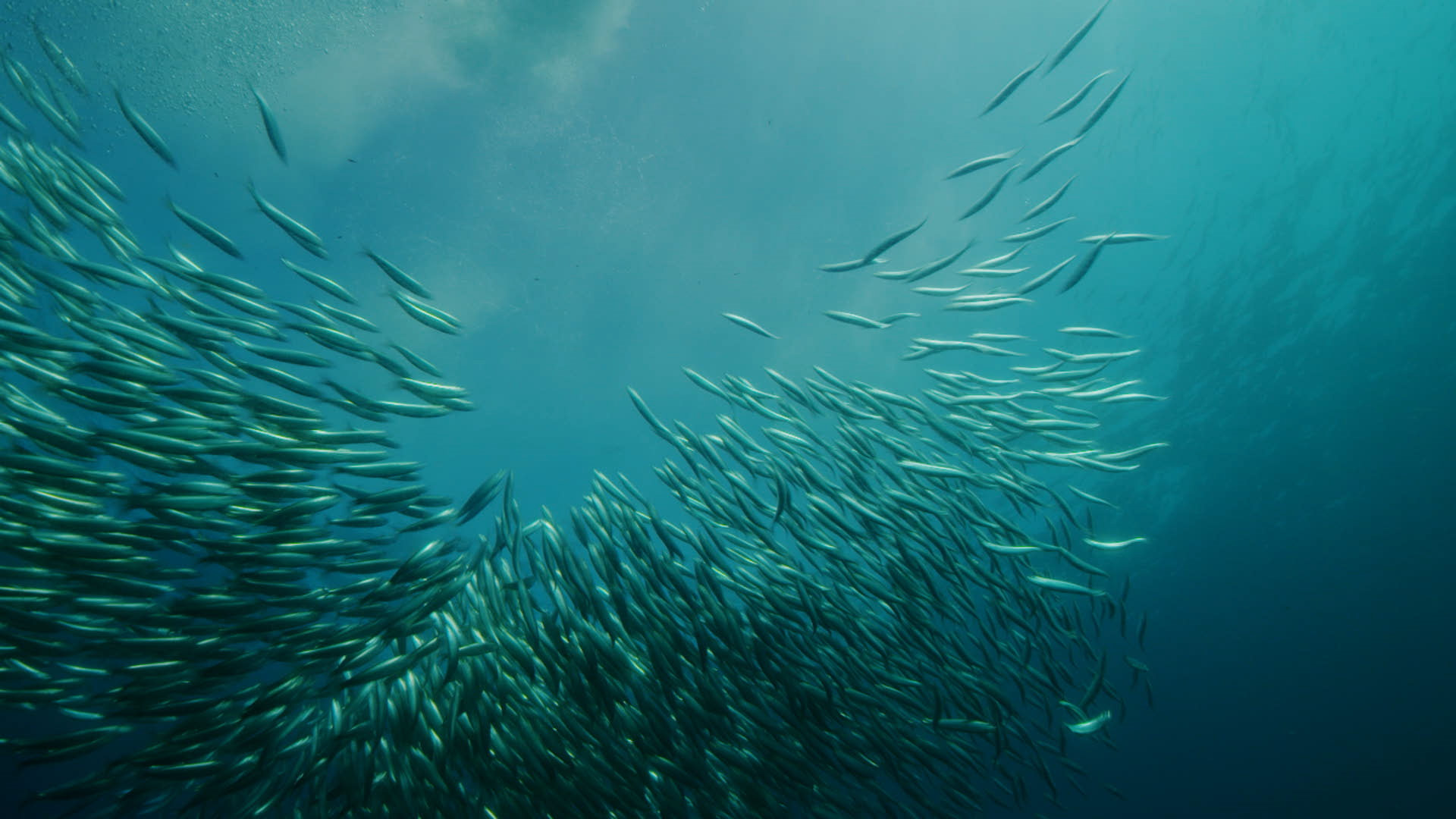 Cape gannet hatchlings are especially vulnerable to predation by the Cape Fur Seal and other marine birds (such as the Cape Gull). Gulls are more commonly feeding on hatchlings, presumably due to depleted food sources. 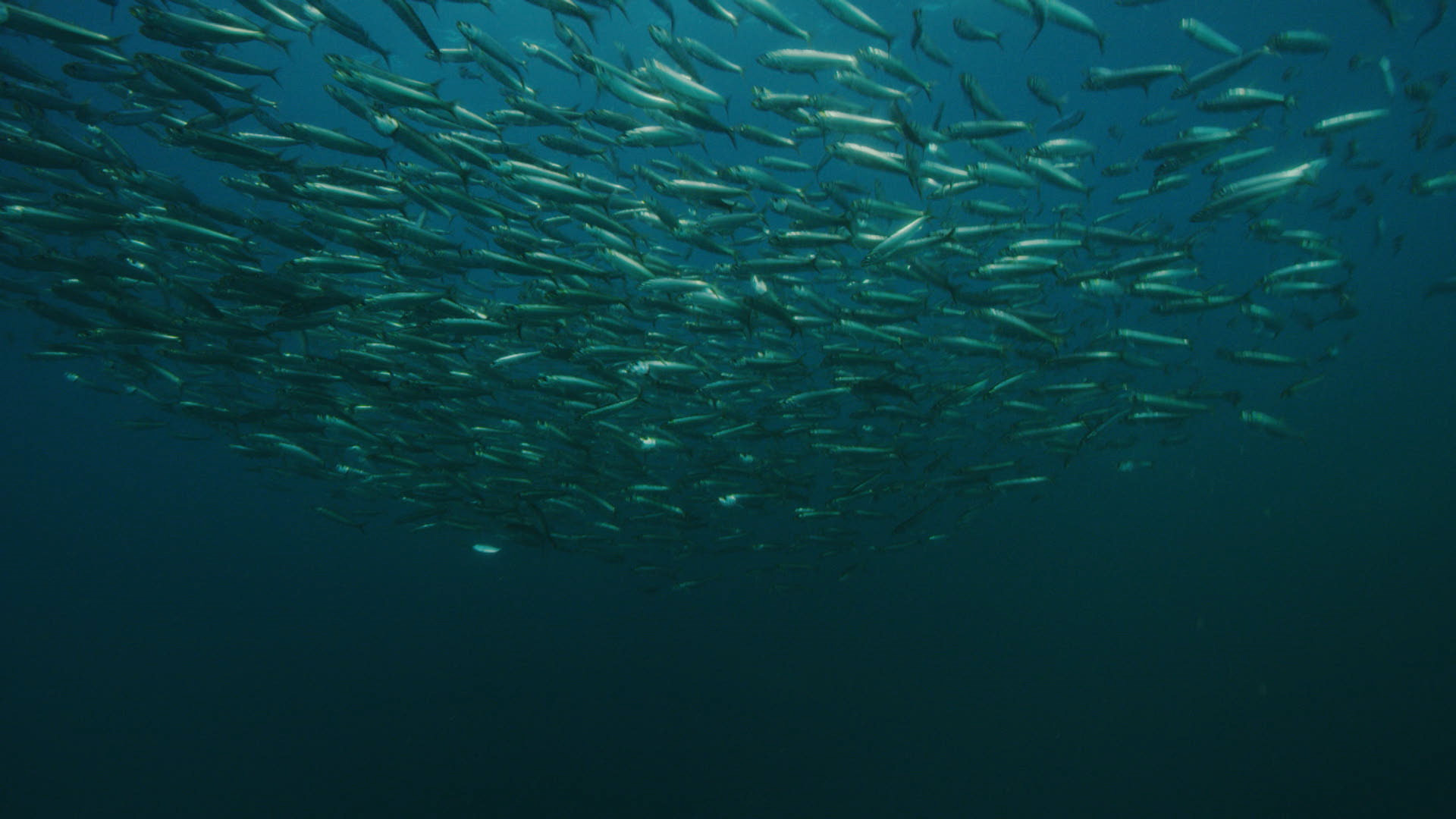 The terrific unified sardine performances are possible due to their lateral lines. The lateral line contains pressure-sensitive pores that detect even the slightest signals or waves generated by the neighbouring sardine. 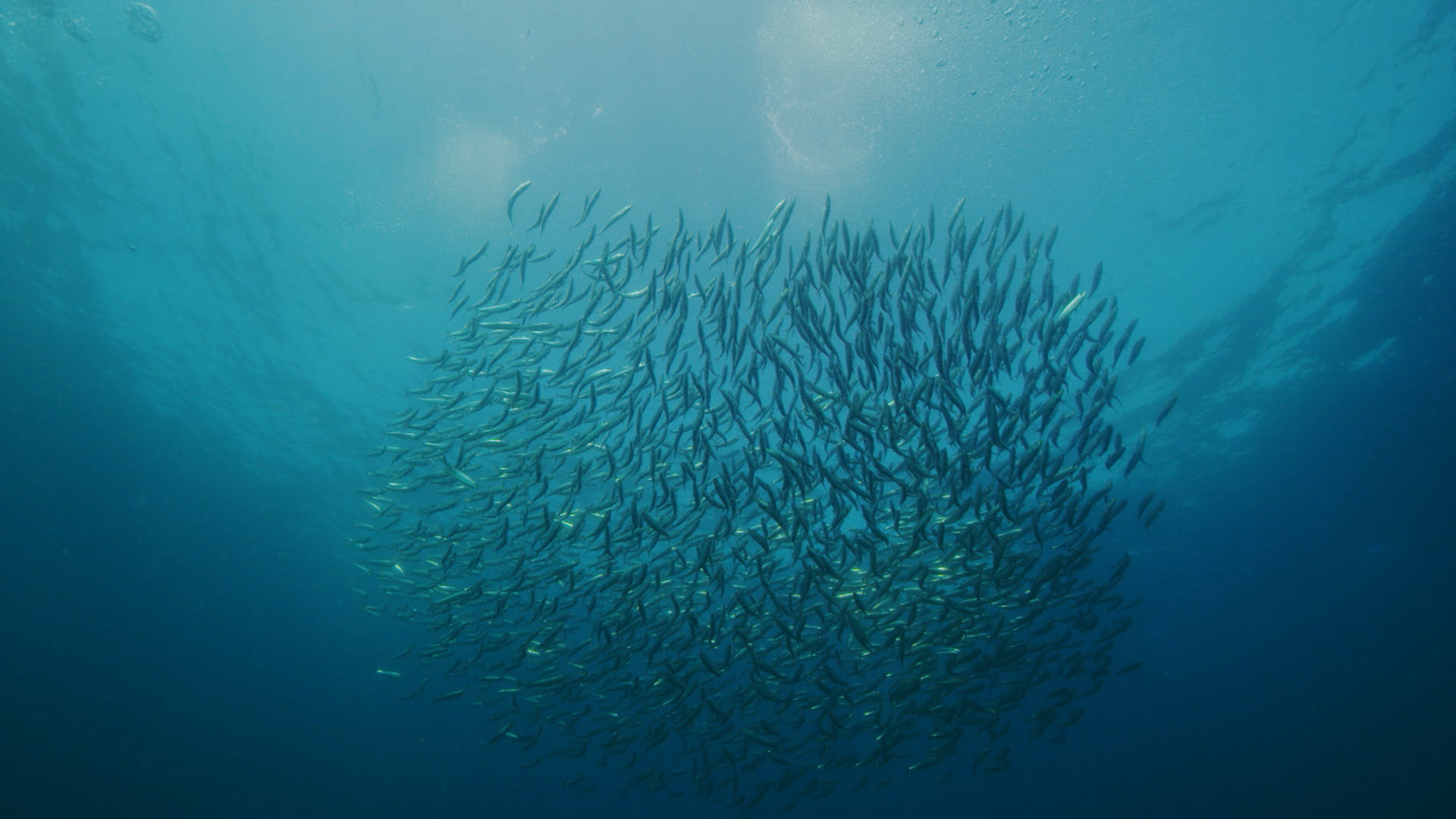 The millions of sardines that unite for the grand sardine run can create a shoal so large (up to 15 km) that they are spotted by satellite. 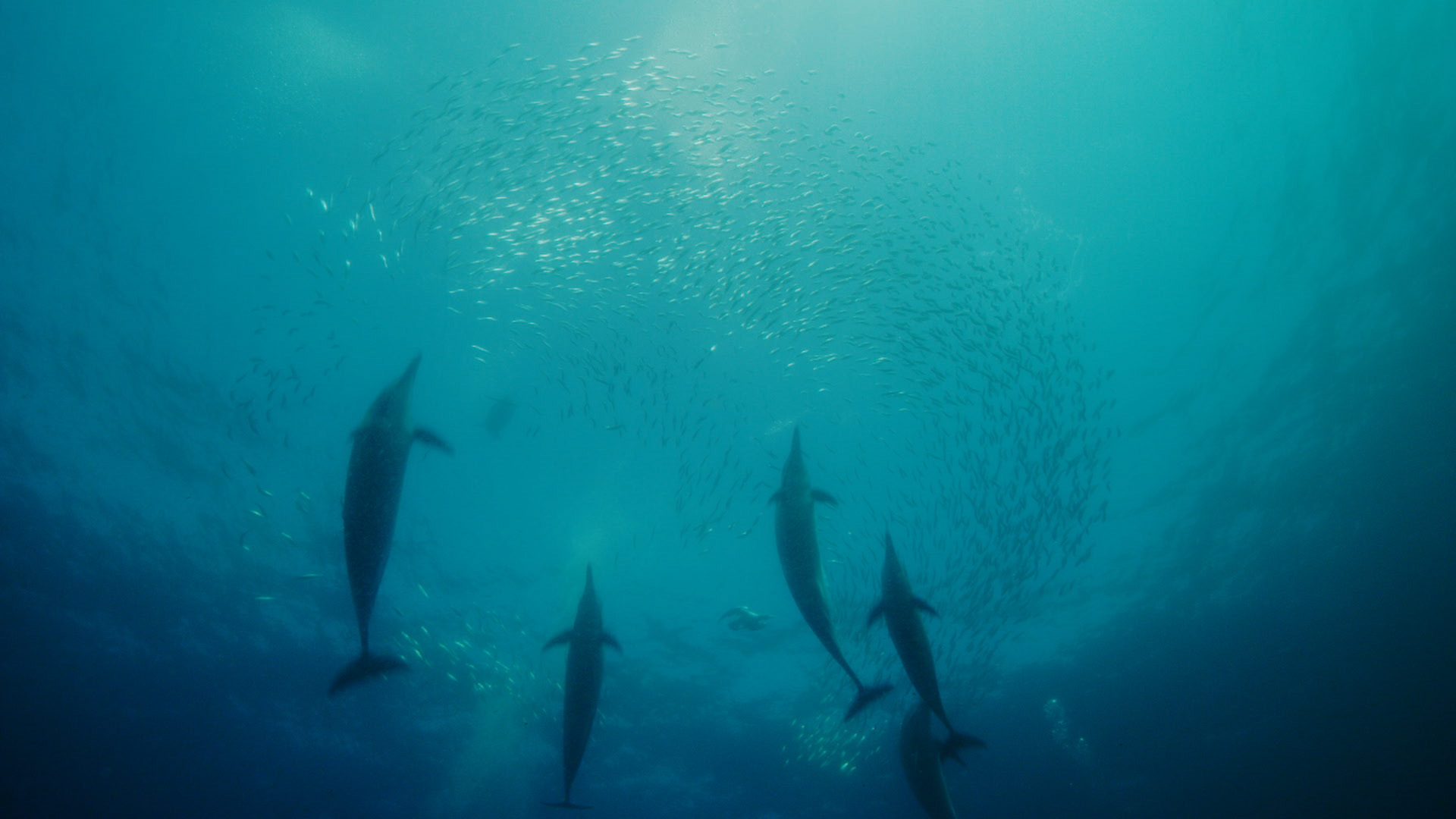 In many cultures and folklore, the dolphin symbolises protection. For example, there are abounding ancient stories (particularly in greek mythology) of dolphins saving people from fatal drownings at sea. 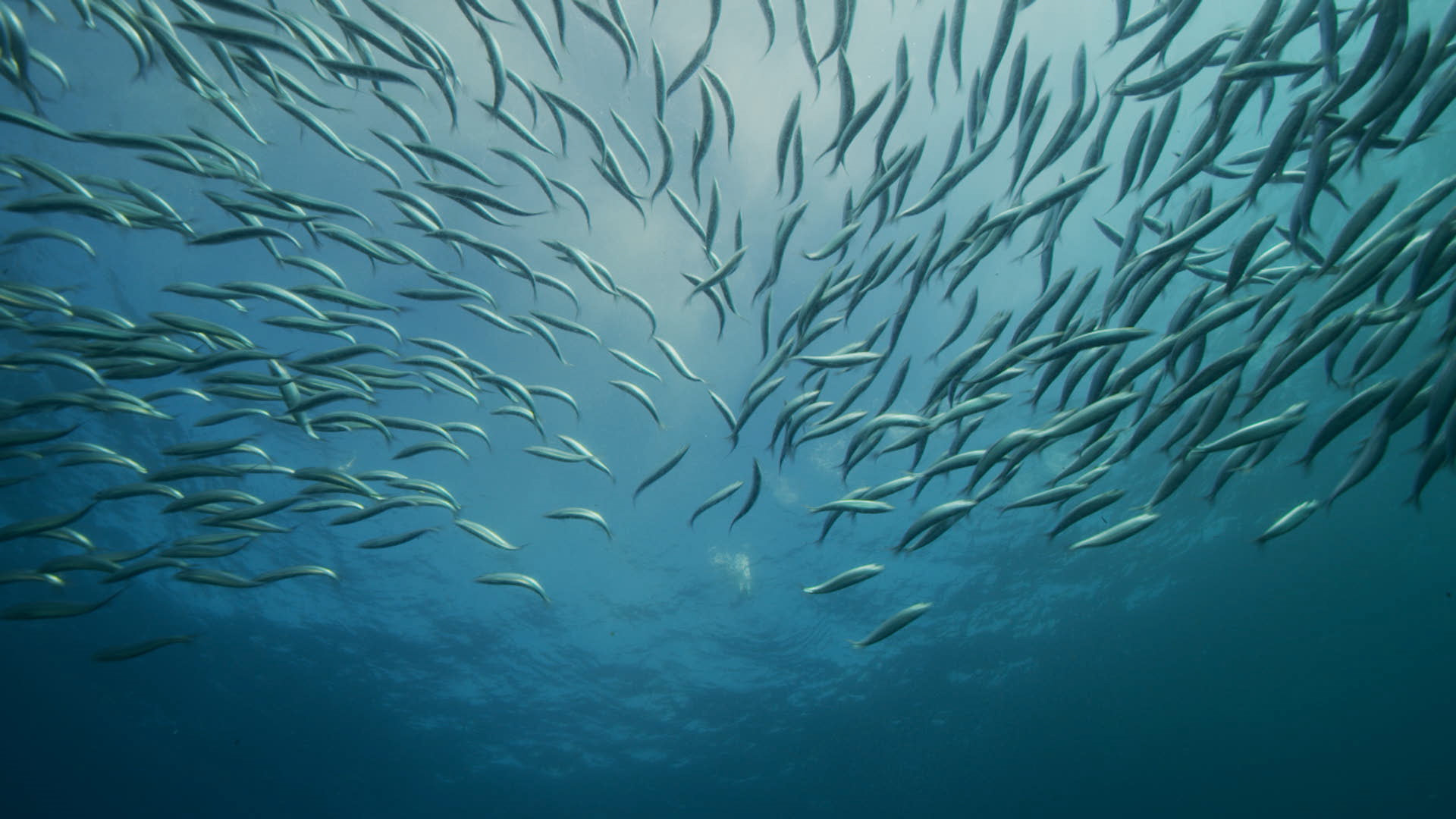 A shoal is a group of fish, a school is when a shoal is unified in their swimming abilities, and a swarm is a highly organised grouping of fish formed in the presence of predators.

Sardines (Sardinops) are small pelagic fish that are globally distributed, but not commonly found in isolation. Although neither mighty nor particularly thrilling on an individual scale, sardines are behind some of the most grandiose underwater sensations: the sardine run. When hundreds of thousands of sardines spawn, migrate, and display schooling behaviour each year along the southern African coastline, one of the largest bait balls on earth assembles, attracting predators and instituting remarkable underwater encounters.